Eamon Dunphy has called for Giovanni Trapattoni to be sacked, saying he does not believe in his players or Ireland's footballing tradition.

Speaking to RTÉ the morning after Ireland’s bitterly disappointing draw with Austria, the outspoken pundit said Trapattoni had shown “a perverse obstinacy” and believes that Ireland is some kind of footballing backwater.

“I think ever since Trapattoni took the job he has had the idea in mind, and Jack Charlton had the same idea, that we are a little country like Malta, Lichtenstein or Luxembourg.

"But we have a fantastic footballing tradition here and he does not respect that”, said Dunphy.

Dunphy highlighted Seamus Coleman and James McCarthy as two of Ireland's best prospects, saying they were "amongst the most promising and outstanding players in the top flight in England."

“The truth of it is that there are not that many decent teams in the world now. A lot of international football is poor, if you take Spain and Germany out.

"England have a poor side at the moment. We are good enough to play a lot better, and a lot better than we have played under Trapattoni.

“We showed for the first 45 minutes last night that we were better than the Austrians. We were more committed and more vigorous. The sum of the parts of the Irish team is greater than the whole, which is a huge thing in international football and not often the case.

“But in the second half, as I predicted at half-time, unless we got Wes Hoolahan on the pitch and started passing the ball we would be under pressure, and would concede territory and possession to an inferior team. That is precisely what happened, and it has happened many other times at Lansdowne Road.

“In the final third of the field Austria had acres of space to play in and it was ridiculous the extent we dropped so deep.

"And then when he made the substitutions he chose not to put Hoolahan on, took Shane Long off and left Conor Sammon on for the whole match. Sammon, who should not have been picked in the first place, had worked very hard and was really tired.

“Trapattoni made mistakes, and coaches shouldn’t make those kind of mistakes and they certainly should not make them repeatedly.”

Dunphy, who won 23 caps for the Republic of Ireland, insisted that the disrespect that Trapattoni has shown towards some players is damaging and, for that alone, he should be sacked.

“You can make a case that while we are still in with a statistical chance of getting to the World Cup it is reasonable to expect that he would not resign.

"There is another case, and I believe it is the right one, that we need to get rid of this guy because he is damaging the players, particularly the young players who he is messing around, and damaging our prospects for the future.

"It’s only last Thursday that he dropped James McCarthy

“Shane Long is an interesting case. He has only started three games for Ireland. He has been an outstanding player for West Brom for some time, and it’s only six months ago that Trapattoni dropped him saying he was injured and Long had to come out and say he was not injured. The next day the manager called him an idiot!.

“Shane Long is one of the most professional, and one of the nicest, players in the game of football anywhere. He is an intelligent and outstanding young Irish athlete and should not be treated like that.

Dunphy believes neither Long nor James McCarthy should be subjected to "that kind of disrespect".

"Trapattoni talked about young Robbie Brady, who was supposed to be playing (against Sweden), and he said he wasn’t sure if he was psychologically ready.

“On those grounds alone I think that Trapattoni should be sacked. He is clearly damaging players.”

Dunphy believes the manager’s obstinacy, stubbornness and fear of creativity are also damaging the team.

“It took Seamus Coleman, who remember did not go to the European Championships, two and a half years to get a start, considering the impact he made when he arrived at Everton.

"Wes Hoolahan has been playing well for Norwich for three or four seasons. He scores goals, makes goals, he’s a wonderful footballer and links play up between forwards and defence and he is creative.

“Trapattoni is similar to Jack Charlton – he is suspect of creativity. He thinks Hoolahan in trying to pass a ball will give the ball away, and that he will refuse to lump it up the pitch in the style that Trapattoni prefers.

“The stubborn streak is there. It’s perverse obstinacy and it’s distressing. It is not good for our fans and our players, who are more important than any individual coach.” 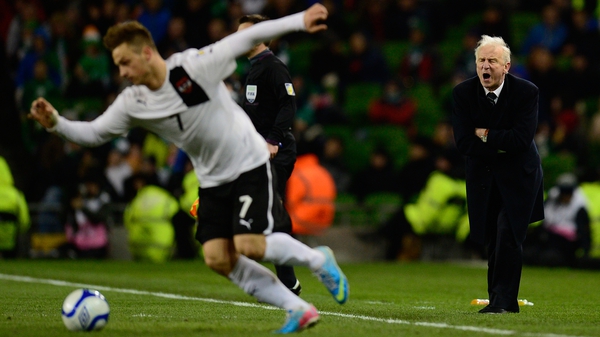