By Micil Glennon in Stockholm

The Republic of Ireland's World Cup qualification hopes received a much needed boost after a 0-0 draw against Sweden in Stockholm.

Giovanni Trapattoni's men had the better of the first-half exchanges with Shane Long wasting their best chance, blasting over when he had time and space in the box.

But the away point, against the team considered to be their main rivals for a play-off place in Group C, sets Ireland up perfectly for Tuesday's home game against Austria.

Manager Trapattoni brought in James McCarthy, originally dropped in favour of Paul Green, after Glenn Whelan failed to recover from an ankle injury.

The 74-year-old also sprung a surprise in handing a start to Jon Walters ahead of Robbie Brady, who he had claimed was not psychologically ready.

Ireland threatened early with James McClean and Robbie Keane beating their markers on the left wing, while Long twisted and turned Andreas Granqvist, but blasted over from 16 yards when the goal opened up.

Sweden won a couple of corners, but were generally off the pace around the pitch.

However, David Forde - making his competitive debut - was tested by Tobias Hysen's volley midway through the half, and had to be alert as Kim Kallstrom's free kick made its way across a crowded penalty box untouched.

If Ireland's plan was to keep Zlatan Ibrahimovic on the periphery, then it was working, with the temperamental PSG striker dropping deep for some action and looking none too pleased with his team-mates when they failed to deliver the ball to his liking.

Still, the ex-Juventus man almost snuck a goal when his shot from an unlikely angle deflected off Seamus Coleman. Forde was stranded but the ball rolled the right side of the post from Ireland's point of view. 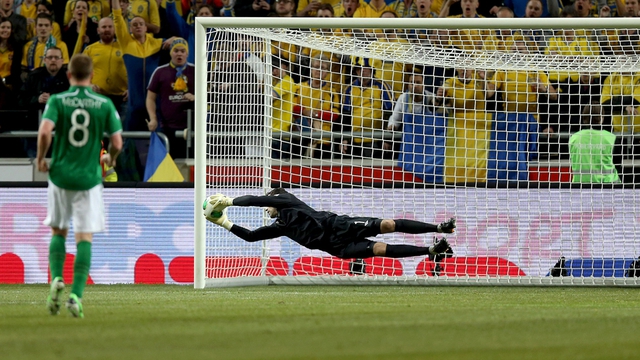 Just before the break, Green, honest and hard-working throughout, went in the book for a late challenge on Alexander Kacaniklic, but the Boys in Green were not allowing the hosts to create in the final third and the majority of the 49,436 in attendance at the Friends Arena began to whistle their frustration.

Long and West Brom team-mate Jonas Olsson were enjoying a private battle, clashing on a number of occasions, as Ireland again began the half brightly.

Even when Ciaran Clark and Green misplaced passes, Erik Hamren's side couldn't take advantage and Coleman made a magnificent tackle as Ibrahimovic threatened on the edge of the box.

Moments later, Seb Larsson fired wide from 18 yards after another poor clearance by Clark, who was preferred to Sean St Ledger in central defence.

Up the other end, Ireland were struggling to create any clear-cut chances. Captain Keane beat the offside trap but over-hit his cross and then Olsson miscued a clearance but the ball evaded Walters.

Hoolahan did his best to get on the ball but through-balls for Keogh and Sammon were overplayed.

Sweden almost claimed what would have been three undeserved points deep into injury time.

The ball dropped for Rasmus Elm in the box, but John O'Shea, who was given the Irish man-of-the-match award by the home judge, was on hand to soften the strike and Forde guided it over the bar.

The goalkeeper then caught the resulting corner and with that Ireland had their point, and Trapattoni, who came in for a lot of criticism ahead of the game, had made his.