Liverpool new-boy Daniel Sturridge made an immediate impact to leave Mansfield manager Paul Cox mulling over his honeymoon options after failing to pull off an FA Cup giant-killing.

Sturridge, a £12million buy from Chelsea a few days ago, wasted no time in getting off the mark and helping the Reds into the fourth round - and another tricky trip to Oldham - at the expense of their non-league opponents.

The Blue Square Bet Conference side had their moments, notably at the start of the second half, before Luis Suarez further crushed their hopes in the 59th minute - and not without controversy.

If a contentious handball had been spotted then perhaps Matt Green's 79th-minute strike might have forced a lucrative replay at Anfield, but it was not to be.

Instead for Cox, who turned 41 today and who married on Friday, his new wife Natasha will have to start flicking through the holiday brochures after failing to cash in on a promise from Blue Square that they would have paid for his honeymoon if the Stags had won.

Unfortunately, they made the worst possible start as it took just eight minutes for Liverpool, and Sturridge in particular, to make their mark.

The Stags defence was scythed open with ease by a delightful through ball from Jonjo Shelvey, and with Sturridge showing a turn of speed in racing on to the pass, he slotted comfortably beyond Alan Marriott from 12 yards. 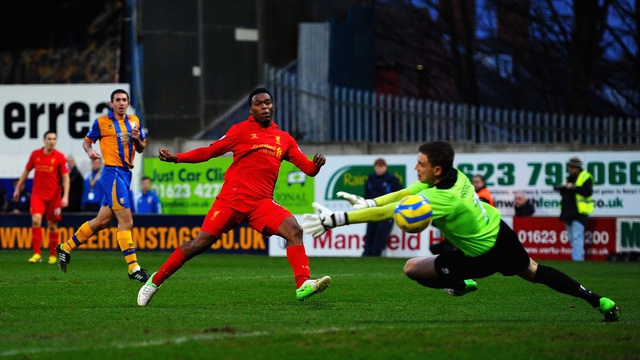 The goal allowed the visitors to take control, with Marriott firmly behind a raking low drive from just outside the area from Joe Allen five minutes later that could have deceived as it flashed through a crowded penalty area.

Within 90 seconds it should have been 2-0, and effectively game over, as the Shelvey-Sturridge partnership combined again, with the latter clean through on to another incisive defence-splitting pass.

On this occasion, however, Sturridge dithered perhaps a fraction too long and shimmied once too often as his eventual crack at goal was beaten away by Marriott at close range.

At that stage, with just 15 minutes elapsed, that would likely have knocked the stuffing out of the Stags, however they grew in confidence as the half wore on even if Liverpool continued to dominate.

They were indebted to a superb sliding tackle from Lindon Meikle in thwarting Suso on the edge of the six-yard box, while John Thompson bravely threw his body in the way of a drive from Stewart Downing as he raced into the area.

But with the realisation they were in the game and there was no walkover on the cards, and with the crowd becoming ever more vocal, they finally conjured their first chance just after the half hour.

A quick surging move resulted in leading scorer Green unleashing a fierce 18-yard drive that stung the fingers of goalkeeper Brad Jones, with Jose Reina one of those rested, along with captain Steven Gerrard.

They were amongst eight changes made to the side following the recent 3-0 victory over Sunderland, with Jamie Carragher taking over the skipper's armband.

With Suarez on the bench, Sturridge was given his chance to shine and a minute before the break he again managed to get in behind the home defence from a Shelvey pass, firing in a shot Marriott touched beyond the far post.

Whatever Cox then said to his players during the interval worked a treat as Town gave the Reds the fright of their lives in the opening few minutes of the second half as they besieged their opponent's area.

It was all sparked by a close-range shot from Anthony Howell that Jones nudged past his right-hand post.

Beyond that Howell saw another effort blocked by Carragher before Jones saved from Louis Briscoe, made a more fumbled attempt from Meikle, and then tipped one past his left-hand upright as Briscoe aimed a powerful angled drive towards the top corner.

It was hair-raising stuff for Liverpool, who eventually drew breath in the 53rd minute on a breakaway which culminated in Sturridge dragging a Downing pass across Marriott.

It proved to be his last act of his debut as Rodgers replaced the 23-year-old and Suso moments later with Suarez and Jordan Henderson.

The Uruguayan's introduction paid immediate dividends, but not without typical debate for which he has become renowned.

Again Downing was the provider and after Suarez's initial effort was blocked by Marriott, he then used his hand to bundle home the rebound from a couple of yards, sparking appeals from the Town players that went unrewarded.

The game appeared to be petering out towards a natural conclusion until Green struck 11 minutes from time with a right-foot shot from 15 yards that bounced off the turf and beyond Jones, heralding a frenetic finish.

The most notable chance saw Green lash a shot goalwards from 20 yards in the first of five minutes of injury time, only for Jones to paw away.

In the end, there was to be no romantic ending. Cox will have to save that for his honeymoon.