Chelsea shook off their Japanese jet lag as an early second-half blitz brushed aside Monterrey 3-1 to set up a Club World Cup final against Corinthians.

The European champions did not get out of second gear in the opening 45 minutes of their semi-final at a half-empty Nissan Stadium, Juan Mata's 11th goal of the season giving them the edge.

They came out flying for three minutes after the break, Fernando Torres scoring his fifth goal in eight days inside 20 seconds, with Darvin Chavez putting through his own net soon after.

Aldo de Negris did grab a stoppage-time consolation for Mexico's CONCACAF champions but Rafael Benitez's men barely broke sweat otherwise in a match that proved as one-sided as predicted and did not trouble the goalline technology being used in Yokohama either.

The attempts before the game to talk up the importance of the Club World Cup - the bits of it that take place before Sunday's final anyway - were made to look rather silly by the sparse crowd that turned up to witness today's affair.

The small band of travelling Chelsea fans tried to cheer on their team but the biggest noise was coming from the pitch, with the players' shouts clearly audible.

Interim Blues boss Benitez lived up to his promise to field a strong team, although he sprung one major surprise by starting David Luiz in midfield for the first time.

It proved a comfortable baptism for the Brazilian, who shot just over from 25 yards inside four minutes and produced a superb slide-rule pass for Eden Hazard two minutes later.

Hazard's first touch was exquisite, making his poor finish from just outside the six-yard box even more wasteful.

Oscar's chest control then let him down from a good Hazard cross and Branislav Ivanovic really should have scored when he volleyed Mata's corner wide.

And if Benitez thought being so far from home would spare him the ire of Chelsea's fans, he was mistaken when they reacted with typical bile to his face being shown on the big screen.

But just as the inevitable 16th-minute chants of "One Di Matteo" were in full swing, Mata came to his fellow Spaniard's rescue by opening the scoring.

Monterrey gave away possession and Ashley Cole, who spent Tuesday serving dinner to his team-mates as a forfeit for losing to them at ten-pin bowling, put the ball on a plate for Mata to sidefoot home. 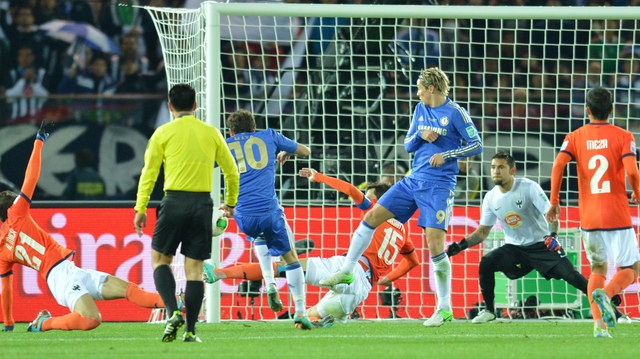 Mata's celebration paid tribute to stricken team-mate Oriol Romeu and he almost added an assist when Ivanovic nodded over another corner.

Injury had also robbed Monterrey of their best player and they posed almost no threat before almost equalising out of nothing in the 28th minute when De Nigris got in front of Petr Cech to head narrowly over.

Chelsea were allowing the Mexicans back into it as the game drifted towards half-time but their biggest concern looked to be a return to the doldrums for Torres, who was struggling even to control the ball despite the confidence boost of four goals in two games.

It took less than 20 seconds of the second half for all that to change, the excellent Hazard getting round the back before squaring for Torres to score via a huge deflection, the first time he had netted in three successive games since his £50million move from Liverpool.

Barely two minutes later and it was game over, Torres's brilliant low cross finding Mata, whose ball back across goal hit the unfortunate Chavez and trickled in.

Chelsea were rampant and Hazard weaved his way through but shot too close to Jonathan Orozco.

Loud cheers then greeted Frank Lampard's introduction for Luiz and more changes followed with one eye on Sunday's final, Mata and Torres both withdrawn.

Di Nigris saw a shot deflected wide as Monterrey pushed for a consolation, which the striker got in stoppage time when he beat Cech from a narrow angle.