Arsenal suffered an embarrassment of epic proportions as they lost on penalties to a battling Bradford side whose achievement should rank among football's all-time giant-killing feats.

Phil Parkinson's League Two players did not just beat Arsenal in this Capital One Cup quarter-final, for much of this match they outplayed Arsene Wenger's woeful Gunners to reach a first ever semi-final.

The Arsenal skipper had earlier appeared to rescue the Gunners with a header three minutes from normal time to equalise Garry Thompson's first-half volley.

But keeper Matt Duke defied the Premier League side to send the tie to a shoot-out - and glory for Bradford.

The defeat in sub-zero temperatures, and another failure in Arsenal's seven-year quest for silverware, will chill the veins of Wenger as he contemplates the season so far. The humiliation was further intensified by Wenger fielding a full-strength side in the League Cup.

The 23,971 sell-out crowd, Bradford's biggest since 1960, had groaned as the teams were read out but they were soon cheering when their top-scorer Nahki Wells out-muscled Vermaelen and forced a sprawling save from Wojciech Szczesny.

Though referee Mike Dean ruled Bermuda international Wells had used too much force, it gave some hope to the Bantams.

Arsenal, meanwhile, passed up opportunities to test Duke from good positions, Vermaelen and Lukas Podolski both heading over.

Hope turned to jubilation for the Bradford fans in the 16th minute when a free-kick led to Thompson's goal.

Vermaelen had blocked off Wells and Gary Jones caused mayhem to Arsenal's zonal markers with his free-kick, Will Atkinson flicking it on for an unmarked Thompson to gleefully fire home.

It could have been 2-0 after Jones' corner found Rory McArdle and only Kieran Gibbs' clearance on the goal-line prevented further embarrassment for Wenger's men.

As the temperature dropped so did Arsenal's spirits, with Per Mertesacker being regularly beaten in the air by James Hanson.

Arsenal needed inspiration from somewhere and Francis Coquelin was almost the unlikely source with a skilful dribble through two challenges before rattling a shot against the foot of the post with Duke looking beaten.

Almost immediately, Santi Cazorla tried his luck from 20 yards but was a couple of yards wide.

Bradford's goal took on a charmed life when a more typical Arsenal move ended with Gibbs driving in a cross and Gervinho, from two yards out, somehow contriving to let the ball go through his legs.

The Bantams gave notice that their threat was not at an end when Hanson flicked on into Wells' path and his shot trickled agonisingly wide.

The Gunners' frustrations continued in the second half, Jack Wilshere flashing a shot well wide, then Gervinho mis-controlling when through on goal.

It was well past the hour when Duke was forced into his first save, parrying Alex Oxlade-Chamberlain's first-time shot from fellow substitute Tomas Rosicky.

As time ticked down, Duke was in action again to deny Wilshere from the edge of the box.

The desperation finally paid dividends with three minutes of normal time remaining. After his corner had been half-cleared, Cazorla whipped in a delicious cross for Vermaelen to head home from close range.

Two brilliant saves in quick succession by Duke from Cazorla took the game into extra time.

Finally, Arsenal started to look like the Premier League side as Rosicky and Wilshere started to pull the strings. Duke's stunning save denied Gibbs, then Sagna's header was cleared off the line by Jones.

Cazorla nearly won it with a stunning, swerving effort from fully 30 yards that struck the crossbar, but Bradford held out for the shoot-out.

Arsenal were always on the back foot from when Cazorla had their first spot-kick saved, even more so when Marouane Chamakh hit the post. 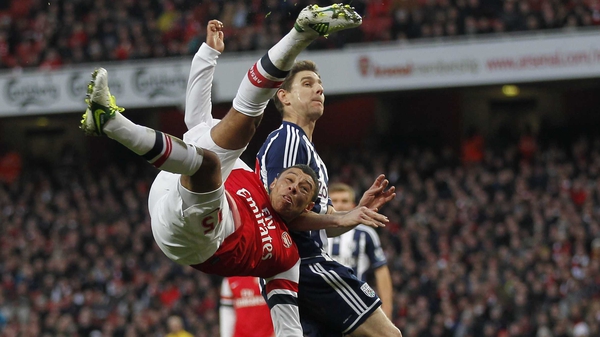