Midfielder Jordan Henderson's maiden Europa League goal saw Liverpool progress to the last 32 as Group A winners with a 1-0 victory over 10-man Udinese in Italy.

It was only his third strike for the club he joined for £16million in the summer of 2011 but he would have had another had it not been for a brilliant reaction save from former Liverpool goalkeeper Daniele Padelli.

But with Young Boys beating Anzhi the goal was the difference between the Reds reaching the knockout stages for the ninth time in 11 attempts and crashing out.

In finding the net Henderson joined a small but illustrious club of Michael Owen, Fernando Torres and Phil Neal to score for Liverpool in Italy.

Liverpool's trouble this season has been a reliance on Luis Suarez, playing his first European away match for the Reds, to provide the goals.

Manager Brendan Rodgers has called for others to contribute and in recent weeks Daniel Agger, Jonjo Shelvey, Jose Enrique and even Joe Cole have chipped in.

By hitting the target in the Stadio Fruili, Henderson became the 15th different player to score this season, three short of the club record.

The 22-year-old had endured a difficult start to his Liverpool career and could have been sold in the summer but he has expressed his desire to fight for a place and a future at Anfield.

To call it a watershed moment for him would be premature but ensuring the club's participation in Europe in the new year was an important hurdle to get over.

It was not all plain sailing, however, as Liverpool's game plan had to be altered in just the 12th minute when Nuri Sahin was forced off with a bloody nose after getting caught in the face, meaning an early introduction for the Reds' leading European scorer this season Shelvey.

The hosts, despite having nothing to play for, created the early chances with Mathias Ranegie heading wide and Roberto Pereyra forcing goalkeeper Jose Reina to tip over his effort.

Suarez's first shooting chance came from a free-kick 20 yards out but he drilled it into the wall but Henderson took full advantage of his first sight of goal.

A month ago against Anzhi in Moscow the England Under-21 midfielder had been hesitant in front of goal but he had no time to be in the 24th minute.

Stewart Downing's corner dropped to Suarez and although his header only reached Suso the young Spaniard had the presence of mind to lay the ball back for Henderson to drill a shot past Padelli.

In truth the visitors failed to properly test Udinese's second-choice goalkeeper, who made just one appearance in May 2007 for Liverpool while on loan from Sampdoria.

Udinese briefly threatened when Reina had to make a low save from Fabbrini's long-distance shot but Liverpool finished the stronger.

Suso looped over a stooping header from Shelvey's cross and Suarez, having fired over an angled shot, forced Padelli into a fingertip save with a close-range overhead effort from the last kick of the half.

Suarez and Suso both had shooting opportunities early in the second half but failed to hit the target while Ranegie powered a header just over as the hosts pressed for the equaliser.

Henderson must have thought he had doubled his tally in the 65th minute when he perfectly timed his side-foot volley from Jose Enrique's cross but Padelli stuck up a hand to tip it over.

Four minutes later the goalkeeper produced another stunning stop to deny Suarez from close range after the Uruguay international had jinked past three players in the penalty area.

However, just when Udinese started to step up the pressure for an equaliser their chances were diminished by a red card for Giovanni Pasquale.

Having already been booked for clattering into the back of Suso he was shown a second yellow 11 minutes from time for tangling with Sterling.

Substitute Antonio di Natale almost produced the cruellest of endings when he fired over with the last kick of the match but Liverpool survived - just.

Having closed out only their fourth victory in 10 matches on Italian soil they can now put Europe to bed until February and focus on improving their Premier League position. 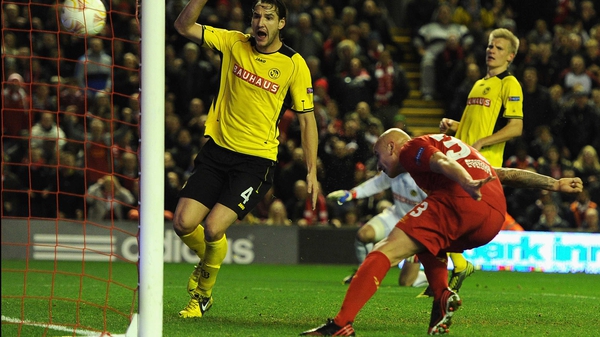