The governing body was staunchly against the use of any form of technology for many years but high profile incidents have forced them to act.

FIFA will try out two systems - UK-based Hawk-Eye and GoalRef, from Germany - at the Club World Cup in Japan, starting with Thursday's match between Sanfrecce Hiroshima and Auckland City.

"It's a big day," Valcke said on fifa.com. "Tomorrow will be the first time that goal-line technology will be officially used in a game. The tests are done; and the instillation tests were successful.

"This is also an important day for us, because we will use one of the two systems we are using here in the FIFA Confederations Cup next year."

"This is a kind of revolution. It is the first time that this kind of technology is coming into football."

He went on: "It will be restricted to the goal-line specifically. The IFAB (International Football Association Board) is there to ensure the 17 laws of the game are protected.

"It was their decision, and they were clear, to say that the technology is limited to the goal-line.

"We must ensure that when the ball goes into the goal, the referee must get the information that the ball has gone in. The referee has the final decision.

"The technology won't change the speed, value or spirit of the game.

"There is no reason to be against this technology."

The Hawk-Eye system is the same as that used in cricket and tennis, which relies on a series of seven cameras to create a 3D picture of each goal, while GoalRef uses electro-magnetic sensors.

Valcke also said he had full confidence there would be no errors from the technology.

"It needs to be the most accurate system we can have at the moment," he said. "There can be no mistakes with this and that is why the IFAB took two years to make sure the system was perfect." 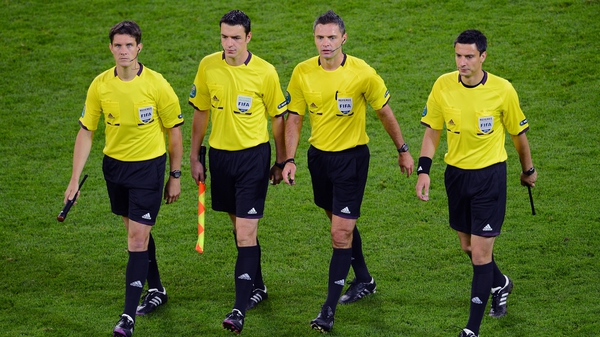