Rafael Benitez was booed off instead of on to the field tonight after Chelsea produced a second straight 0-0 bore draw in the west London derby against Fulham.

Three days after Benitez's first game in charge of the Blues saw him endure a savage reception from his new club's supporters, he was unable to turn the jeers into cheers as they slipped further off the pace in the Barclays Premier League.

And, as on Sunday against Manchester City, they could have easily lost against a Fulham side who had the better of the chances and a striker in Dimitar Berbatov who completely outshone opposite number Fernando Torres.

By the end of a frustrating evening for Chelsea fans, they were back to chanting, "You're not welcome here", at Benitez and even, "We want our Chelsea back", in front of the watching owner Roman Abramovich, who looked as bored as anyone at Stamford Bridge.

As he entered the field, Benitez was spared the cacophony of boos that greeted his introduction on Sunday, probably because this time there was no introduction.

Instead, there was what might be described as a conspiracy of silence from the home fans, with nearly all of the noise coming from the away end for a good 15 minutes.

The Fulham fans mocked the lack of atmosphere, which only improved with a chorus of, "There's only one Di Matteo".

There was certainly no football to shout about as Chelsea toiled to cut open their impressively-organised opponents. 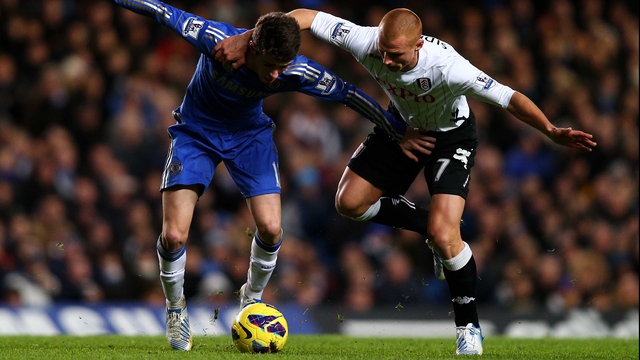 There was not enough width from the home side to pull them out of position and not enough tempo to get through the middle, despite the best efforts of Eden Hazard.

David Luiz's skied free-kick was the first shot at goal after 25 minutes, the creativity of the rested Juan Mata becoming more and more conspicuous by its absence.

Some speedy football from Oscar finally created a real chance just before the half hour but Torres's weak shot on the turn from Cesar Azpilicueta's cross was straight at Mark Schwarzer.

Benitez said yesterday Torres needed to get down the gym and he was given a lesson in brute power moments later by Berbatov, who forcefully shrugged off the recalled Oriol Romeu.

And after a goalless first half, there was another crucial tackle shortly after the restart when Mahamadou Diarra stopped Oscar finishing off Hazard's pass.

But Chelsea could have fallen behind twice in quick succession inside 10 minutes, an errant offside flag rescuing them after Berbatov perfectly timed his run on to Diarra's flighted ball, and Petr Cech saving from John Arne Riise following a flowing breakaway.

Ramires and Giorgios Karagounis both sent shots too close to either goalkeeper before Mata finally arrived, Ryan Bertrand making way.

Fulham sent on Chris Baird for Diarra before Mata showed Chelsea what they had been missing with a corner glanced wide by Branislav Ivanovic.

An increasingly-frustrated Ivanovic was booked for disputing a free-kick, while Torres's travails continued to the extent that supporters began venting their frustration.

He, Oscar and Hazard wasted a great chance to strike after fine harrying from Azpilicueta, with Romeu following Ivanovic into the book for upending Berbatov.

The Bulgarian's coolness helped win a dangerous free-kick that got Luiz cautioned before more composed play set up Riise for a fierce drive Cech only just repelled.

In between that, Kerim Frei replaced Karagounis.

Torres finally found some space with just over 10 minutes remaining but his angled volley after good chest control was cleared by Aaron Hughes and may have been going wide anyway.

Frei had a dubious penalty appeal turned down before Marko Marin was handed his Premier League debut in place of Hazard and Mladen Petric came on for Hugo Rodallega.

With time running out, the crowd finally turned their anger on Benitez, who was urging his team forward.

Dutifully, they spent the closing moments camped in the Fulham box but despite a succession of blocked shots and other near misses, they could not force a breakthrough.