Former Shamrock Rovers defender Pat Flynn has signed for Shelbourne ahead of the 2013 Airtricity League season.

After four seasons at Shamrock Rovers where Flynn won two league titles, the hard-tackling full-back played his football at St Patrick’s Athletic for the 2012 season.

Flynn is an experienced and versatile defender and can play anywhere across the back four and should be a key member of manager Alan Mathews’ squad for the new campaign.

“It is common knowledge that Shelbourne FC will be operating off a reduced wages budget for the 2013 season." - Shelbourne FC

Mathews has also signed midfielder Sean Brennan who helped Drogheda United to a runners-up place in the Premier Division in 2012.

Three members of last year’s Shelbourne panel have also re-signed as Glenn Cronin, Philly Hughes and Stephen Hurley have all committed to the Dublin club for 2013.

Pictured below: Pat Flynn letting Real Madrid's Cristiano Ronaldo know that he had arrived in Tallaght when Shamrock Rovers played the European giants in 2009 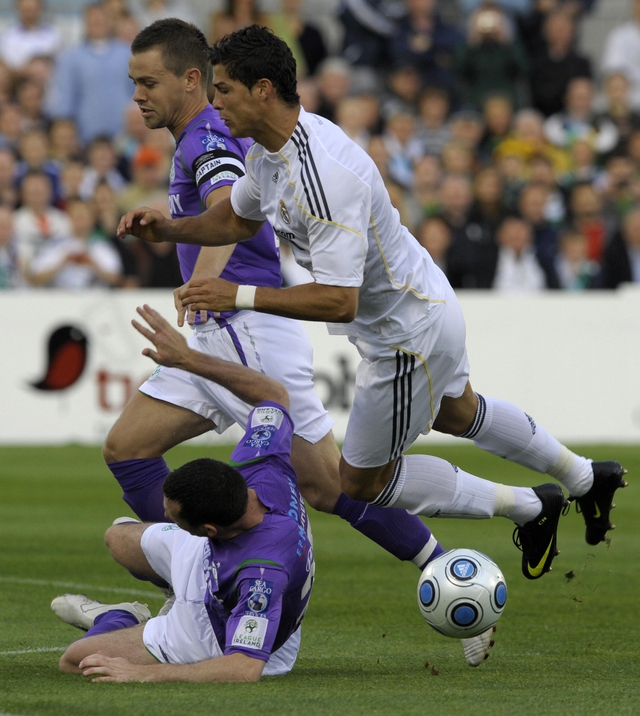 Mathews will be working on limited resources as he attempts to put together a squad that can compete in the Premier Division in 2013.

A statement released by the Tolka Park-based Shelbourne read: “It is common knowledge that Shelbourne FC will be operating off a reduced wages budget for the 2013 season and the club is grateful to manager Alan Matthews for accepting this situation and going about signing a squad with potential for not just 2013 season but for the 2014 season and beyond.”