Irish internationals Jon Walters and Joey O'Brien were on the mark as West Ham and Stoke played out a 1-1 draw at Upton Park.

The draw denied the Hammers the opportunity to move up to fifth in the Premier League table.

Walters struck for Stoke on 13 minutes as they went in search of their first away league win in 15 outings but they had to settle for a point as Joey O'Brien netted a rare goal on 48.

West Ham's task was always going to be harder after conceding the lead as Stoke looked to sit back and soak up the pressure.

Sam Allardyce's side struggled to create chances in the first half but were much more potent after the break and dominated proceedings following O'Brien's strike, only his second goal for the club.

The hosts saw more of the ball in the opening 10 minutes but Stoke showed their usual aerial threat on a couple of occasions, most notably when Ryan Shawcross angled a long ball forward which Peter Crouch knocked down into the path of the onrushing Charlie Adam, who could not keep his shot down.

Unsurprisingly Stoke's opening goal came from a set-piece but it was not scored in the manner usually associated with Tony Pulis' side. 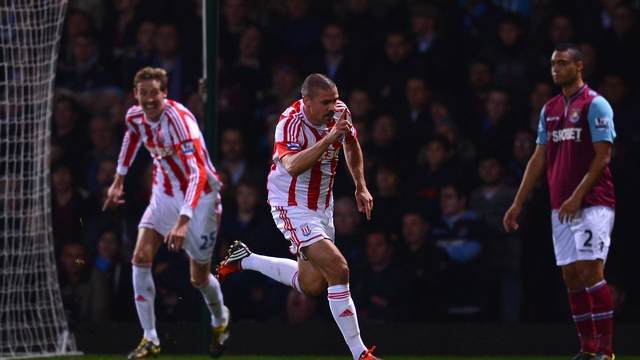 George McCartney cleared the ball behind and Glenn Whelan rolled the corner across the ground and into the area where a clever run from the far past allowed Walters to convert with a thumping effort past Jussi Jaaskelainen.

West Ham were struggling to break down a resolute Stoke defence that had been given something to protect thanks to Walters' early goal.

Andy Carroll, still searching for his first goal for the Hammers, managed to get a head on a Gary O'Neil cross but Asmir Begovic collected with ease.

Stoke, playing on the counter-attack, pushed forward and almost doubled their lead through another corner.

This time the corner was launched high into the penalty area and Robert Huth powered a header towards goal that was pushed clear by Jaaskelainen.

Mohamed Diame and Kevin Nolan combined well after 25 minutes but Nolan's through ball had too much weight on it and Begovic gathered at the feet of Diame.

Nolan came close to a sixth goal of the season as he finally forced Begovic into a decent save with West Ham starting to exert control on the game.

Allardyce was up in arms moments later, along with most of the West Ham players, as referee Chris Foy seemed to miss Geoff Cameron's push on Carroll as he challenged for the ball on the edge of the penalty area.

The visitors came within inches of doubling their lead seven minutes before half-time as Steven N'Zonzi fired in a shot from 25 yards that crashed off the crossbar and bounced just in front of the goalline with Jaaskelainen well beaten.

West Ham should have equalised within a minute of the start of the second half.

Diame who combined well with Modibo Maiga down the left flank to free McCartney.

The left-back's cross was perfect for Nolan but the Hammers' skipper put his header too close to Begovic.

The leveller did come only moments later as Diame's shot was charged down and O'Neil delivered from the right for O'Brien to convert from the middle of the goal.

Stoke appeared rattled by the West Ham equaliser and Maiga came close to putting the home side ahead with 35 minutes left on the clock.

Mark Noble's corner was won in the air by Carroll and Maiga latched onto his knockdown but could not beat Begovic who made a smart save.

Allardyce's side had taken heart from O'Brien's goal and again came close as O'Neil's cross deflected off Huth and wide of the near post.

Former Middlesbrough man O'Neil then came close with his own effort after a well-worked short corner routine found the 29-year-old, making his first league start of the campaign, free in the area but his whipped effort curled just wide.

Stoke seemed to find some composure as the half wore on and came back into the game, although a wayward effort from Walters was all they had to show for their endeavour.

Winston Reid also had a good chance to secure all three points with a late header but the New Zealand international did not get enough on his effort.