Giovanni Trapattoni left the Faroe Islands clinging on to his job after the Republic of Ireland handed him a 4-1 win and three World Cup points just when he needed them most.

Trapattoni sent his players into battle in Torshavn amid speculation that his fate had already been decided, but saw them respond just as he had hoped they might to their humiliation by Germany to rekindle their hopes of qualification.

There was a brief flurry after Faroes substitute Arnbjorn Hansen reduced the deficit with a 68th-minute header, but Pol Justinussen's own goal and an 88th-minute Darren O'Dea header dashed home hopes.

It had been a tumultuous few days for Trapattoni and there was another twist even before kick-off when it was confirmed that the post-match de-brief he usually holds with the media a day after a game, and which had been planned for Wednesday in Dublin, had been cancelled with the manager due to fly straight back to Milan.

FAI chief executive John Delaney refused to discuss the matter as he sat stony-faced in the crowd before kick-off and as he left after the final whistle having applauded the team off the pitch.

Ireland ran out knowing the 90 minutes ahead might prove crucial in more than one way with their hopes of World Cup qualification facing significant damage if they did not emerge with three points, and Trapattoni's future hanging in the balance.

Having ordered his players to forget the horrors of Friday evening, Trapattoni handed 20-year-old Manchester United winger Robbie Brady the task of improving the supply lines to returning skipper Robbie Keane and his strike-partner Walters.

Brady certainly added some vigour down the right and might have unlocked the Faroese defence on several occasions during the early exchanges. 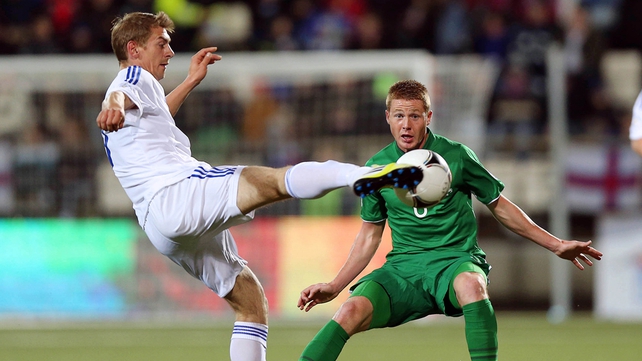 Having picked out O'Dea with an early corner the defender could not direct at goal, the midfielder cut inside to curl a left-foot shot just wide of the far post, and he was also involved in the move which should have led to Ireland taking a 13th-minute lead.

Brady played a corner short to Aiden McGeady, who clipped it in to Keith Andrews, who had lost Rogvi Baldvinsson at the near post, but failed to hit the target with the goal at his mercy.

The Bolton midfielder clasped his head in his hands, knowing a glorious opportunity had come and gone and although several more arrived before the break, none was better than the one which had just gone begging.

Walters headed over from McGeady's 22nd-minute cross and then forced a save from keeper Gunnar Nielsen six minutes later after Andrews had flicked on Keane's cross.

However, as the half wore on without the deadlock being broken, the home side grew in confidence and exerted genuine pressure.

Keeper Keiren Westwood had already had to claw away Daniel Udsen's cross as it threatened to drop over him and under the crossbar when he saw O'Dea throw himself into the path of Joan Edmundsson's 38th-minute shot after Christian Holst had opened up the Irish defence.

Trapattoni withdrew Brady at half-time and replaced him with striker Simon Cox, and although the opening goal arrived just 43 seconds after the restart, it did so from an unexpected source.

Wilson picked up possession wide on the left and cut inside before unleashing a 30-yard effort which flicked the head of full-back Jonas Naes and flew past the helpless Nielsen and into the top corner.

In an instant, the tension lifted and Ireland began to play with the confidence of knowing their qualifying campaign was back on track, and they increased their lead within seven minutes.

On this occasion, Wilson turned provider, crossing from the left for Walters to head firmly towards goal, where Keane did enough to put off Nielsen, but not enough to justify his claims that he had got the final touch.

The LA Galaxy striker might have added his name to list of scorers with 56 minutes gone, but dragged his left-foot effort just wide of the far post with the Faroes buckling. 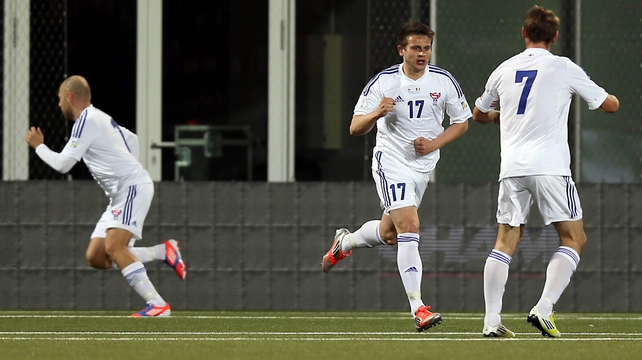 But just as it looked as though Ieland had the points wrapped up, they allowed Naes to make ground down the right and cross for Hansen to climb above John O'Shea and head firmly past Westwood.

However, hopes of a fightback were dashed within five minutes when, with the Faroes pushing for an equaliser, Walters broke into space down the left and sent in a cross which McGeady could not reach, but Justinussen turned into his own net.