Friday the 13th of October, 1972, didn’t bring much luck for lovers of football in Derry City.

At a board meeting convened by the club, its directors decided to pull out of the Irish League because it wasn’t allowed to play home games at its ground, The Brandywell.

It began a 13-year stretch in the wilderness for the club.

Northern Ireland was engulfed in war at the time, with 1972 being the worst of year of “The Troubles” – there were 30 shootings a day that year; most notably 13 civil rights marchers were killed in Derry city by British soldiers on 30 January 1972, within a mile or two of The Brandywell, in what has become known as ‘Bloody Sunday’.

Northern Ireland’s Civil Rights Movement, which sought to redress discrimination in jobs and housing towards Northern Ireland’s Catholic minority, began in 1968. The Catholic and Protestant communities began to clash around that time and when the British Army intervened it served to inflame the situation. The tension spread among the football world.

“Travelling football fans were chased by the other section of the community.

"Make no mistake about it. There were a few battles in those days, especially for Derry City fans going to the likes of Linfield and Glentoran and Portadown. There would be battles before and after matches with the home supporters.”

"There were a few battles ... especially for Derry City fans going to the likes of Linfield and Glentoran" - Arthur Duffy

The Brandywell, which is located in the Bogside area of Derry, its most famous Catholic enclave, sits in a valley, and is overlooked by a cemetery. It too, became a focal point for dissent. One match in particular stood out.

Linfield, the richest club in the Irish league at the time, came to play Derry City on a rainy Saturday on the last weekend of January 1969.

The Belfast outfit had already secured the league title; Derry City only needed a point to finish second, which they achieved by winning the match 2-1.

A group of about 100 Linfield supporters arrived by train from Belfast in the afternoon and were escorted to the ground by the police from the train station in a curious procession, shouting anti-Catholic insults as they went.

One of the fans wore a police helmet. There were a few skirmishes outside the ground, with bottles and large stones flung over the roofs of nearby houses at the carousing Linfield fans.

Trouble in the terraces flared during the first half of the match.

A fight broke out between rival fans, which cleared a huge space in the terraces, when some Linfield fans burned a Glasgow Celtic jersey.

Order was restored by the police but broke down again when Derry City took the lead in the 37th minute.

Both sets of fans ran at each other in the terraces, some fans invaded the pitch. Stones and bottles were launched.

Five people were injured and later treated in hospital; two policemen were struck with bottles.

At one stage, reporters in the press box had to pull down a shutter to avoid being hit by missiles.

Linfield’s fans left the ground before half-time and were taken by bus to the train station. They didn’t return until a Setanta Cup match in 2005.

In September 1971 – the year Derry City lost 3-0 to Distillery in the Irish Cup final in a game in which current Sunderland boss Martin O’Neill scored two goals – a Ballymena United bus was hijacked and torched outside the Brandywell.

The coach had been chartered from the state bus provider, Ulster Bus, by Ballymena United.

“There was rioting going on that day in Derry,” says Richard McKinney, who began selling match programmes at Derry City games in 1965 as a 10-year-old.

“At that part of the Bogside, there was nearly rioting every day. It wasn’t actually fans that burnt this bus.

"There were boys rioting outside and they came into the car park at the Brandywell and saw this bus and dragged it out and burned it. Buses were forever getting burnt in those days.”

"Buses were forever getting burnt in those days.” - Richard McKinney

Two clubs, believed to be Linfield and Glentoran, stated they wouldn’t travel to the Brandywell.

Few, if any, Derry City fans made the journey to the Protestant heartland for those relocated matches. McKinney never made the trek.

“In fact I’ve never been to Coleraine in my life,” he says. “It’s one of those real Loyalist-type towns. A lot of fans didn’t go. It was a waste of time and money to get there.

They thought they wouldn’t be safe. You’d hear stories about fans going to matches in Belfast and they’d be beat up and the cops just stood by and watched. That type of thing.”

“With the Troubles being fairly rampant, our boys didn’t like travelling,” adds Eddie Mahon, who was Derry City’s goalkeeper at the time, having made his debut as an 18-year-old in 1963.

“We had the reputation as being Nationalists, even though we always had a few Protestant players on our team. Nearly everywhere else you went in Northern Ireland would have been the opposite – Loyalist.

"There was a certain amount of fear of travelling, fear of repercussions against the fans so there was nobody at all at those games in Coleraine. It was absolutely dreadful.

“There was a bit of sectarianism in the decision – some of the other teams were strong Loyalists. The Ballymena bus incident was blown out of all proportion.

"There was absolutely no danger to players or spectators. The incident occurred a couple of hundred yards away from the ground on Hamilton Street.

“There were other grounds in the league which were more dangerous. At Bangor, for example, at one of their training nights a guy came on the training ground and shot Matt Bradley, one of their players.

"At the Crusaders’ ground, there was a policeman shot during a game. There would have been much more reason for expelling other clubs but because we were Derry and Nationalist, we were the ones that got the chop.”

A motion was tabled by Portadown FC to allow Derry City to return to the Brandywell in October 1972 but was rejected by a single vote, 6-5; Coleraine abstained.

Derry City’s wilderness years had started. The Brandywell turned into a ghost town.

The club survived on volunteerism. It hosted dog-racing nights a few times a week and on Saturday mornings a junior men’s football team played on the pitch in an intermediate league.

Mahon and his teammates joined other Irish League clubs or teams playing in the League of Ireland south of the border, including Athlone Town, Dundalk and Finn Harps.

“Derry City downsized really to a junior club,” he says.

"We looked for grounds all over the place, but it became then a matter of principle to play in the Brandywell. Our fans then said, ‘No, we’re not moving’.”

Mahon and a few other football men in Derry - including Tony O’Doherty, who is a director of the club today, Terry Harkin, who played football alongside John Charles and John Toshack at Cardiff City, and Eamonn McLoughlin - applied to join the League of Ireland in 1984, and succeeded at the second attempt.

On 8 September 1985, Derry City returned to competitive senior football, albeit in a different jurisdiction, against Home Farm in a League Cup match.

Eight thousand fans piled into the Brandywell for the match. There were no police in the ground.

“They would have caused more problems than they’d have solved,” says Mahon. It is a policy the club still practices today.

“They were loyal soccer fans but they were also making a political statement – telling the football authorities in Belfast that they could keep their northern league with all the bigotry, prejudice and sectarianism associated with it.”

Within four years, Derry City had won promotion and in 1989 completed a historic triple – the League Cup, the League and FAI Cup.

Richard Fitzpatrick is the author of El Clásico: Barcelona v Real Madrid, Football’s Greatest Rivalry, which is published by Bloomsbury

Noel Larkin and Paul Carlyle with the FAI Cup in 1989 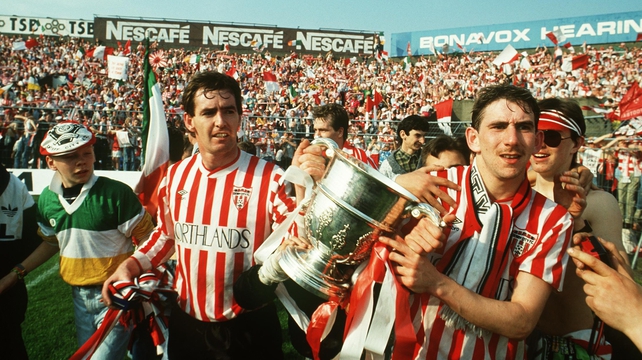