Liverpool escaped with their 41-year unbeaten record against Swiss teams intact but a sloppy defensive performance almost cost them in a 5-3 Europa League Group A win against Young Boys.

That Brendan Rodgers' second-string side, which included a trio of debutants - two of whom were teenagers - scored five times was something of a surprise considering the struggles of the first-team this season.

They were given an early helping hand thanks to a comical own goal from Juhani Ojala.

And 19-year-old Andre Wisdom scored on his debut after Raphael Nuzzolo had equalised following a Jose Enrique error.

But Ojala then headed in at the right end and Gonzalo Zarate made it 3-2 before the match turned around again when Sebastian Coates headed in and then Jonjo Shelvey scored twice.

It was the first time Liverpool had scored more than once in eight European away matches and their first in any group stage game away from home since beating PSV in December 2008.

Rodgers wanted to give his younger players a chance to prove they were good enough and while they may not have convinced him he will not have to make 11 changes for Sunday's visit of Manchester United - having left the likes of Steven Gerrard and Luis Suarez at home - they at least displayed the character he was looking for.

Despite concerns about the inexperience of the squad, having left eight senior players at home, the average age of the starting line-up was 24 - although that was pushed up slightly by 34-year-old Jamie Carragher.

Their veteran centre-back was the only player on the field who played in Liverpool's last away win in European competition - excluding qualifiers - when the Reds beat Romanians Unirea in February 2010.

The comedy started in the fourth minute when the Young Boys' defence got themselves in a tangle for no discernible reason.

Stewart Downing's right-wing cross did not look to be threatening but Dusan Veskovac headed the ball back across goal and his central defensive partner Ojala headed in.

That was only the beginning as Wisdom's inexperience at this level caught him out when he went to fetch the ball thinking he had a throw-in. While he was off the pitch a ballboy tossed another to Young Boys, who quickly restarted, leaving Wisdom - more accustomed to the reserve team where you fetch your own ball - running back on still carrying the ball he had chased.

But if that error was down to inexperience, Jose Enrique's decision to dribble away from the hands of Brad Jones in the 38th minute was bad judgement as he passed straight to Nuzzolo - who drilled in a first-time shot before Jones had time to recover properly.

Wisdom, however, came to his defensive colleague's rescue two minutes later when he produced a huge leap to head home Nuri Sahin's corner.

The goal was Liverpool's 200th in this competition since they first took part in 1967-68.

Wisdom was also the first Reds defender to score on his club debut since Gabriel Paletta in October 2006 - which is where the England Under-19 international will want the comparison to end.

Just before the break Alexander Farnerud, who had earlier failed in trying to claim a penalty for Carragher's challenge, hit a low shot against Jones' right-hand post.

The second half was less than 10 minutes old when Raul Bobadilla was given far too much room on the right to pick out the run of Ojala to head in at the far post.

When Bobadilla outmuscled both Carragher and Suso, another debutant, to send Zarate down right the Argentinian neatly dinked over Jones.

Liverpool needed a quick response and it came within four minutes as Coates' looping header crept in at the far post with substitute Fabio Borini claiming a touch which was barely - if at all - there.

Borini had a more decisive influence on the winner as he picked out Jordan Henderson's run and the midfielder cut the ball back for Shelvey to fire home - and the same player added a similar second late on.

Rodgers' maiden Europa League campaign is up and running in the most unlikely way - and the Northern Irishman will be pleased his selection gamble did not backfire on him. 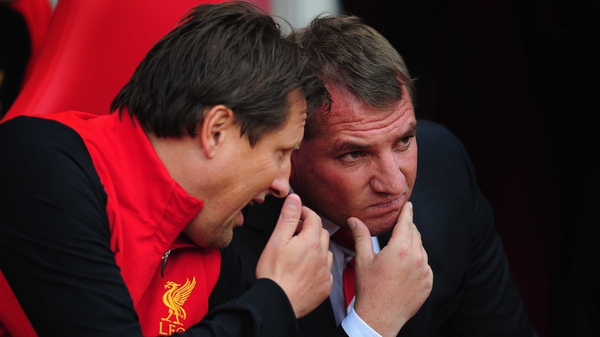 Steven Gerrard, Luis Suarez and Jose Reina are among those left at home for Europa League opener