Arsenal got their Champions League campaign off to a winning start after coming from behind to beat Montpellier 2-1 in France.

Manager Arsene Wenger, serving the first of his three-game touchline UEFA ban, would have been fuming from the stands when captain Thomas Vermaelen gave away an early penalty, although replays suggested the foul was probably just outside the box.

However, the Barclays Premier League club responded magnificently and were soon level through a fine finish by Lukas Podolski, before Arsenal swept ahead on 18 minutes through Gervinho.

Although the hosts rallied after the break, with lively winger Remi Cabella hitting the crossbar and goalscorer Younes Belhanda missing a great chance late on when he fired straight at stand-in goalkeeper Vito Mannone, the Gunners closed out a battling victory.

Combative midfielder Abou Diaby had only just returned from injury to the starting XI - and went straight into the referee's notebook inside the first minute when he clattered Marco Estrada.

Arsenal settled well, and soon had the hosts on the back foot.

However, Montpellier remained dangerous on the counter-attack - and took a somewhat controversial lead on nine minutes.

Gunners captain Thomas Vermaelen slid in on Belhanda at the far right edge of the penalty area, and the Moroccan went down in a heap. However, the assistant on the goalline indicated the foul was inside the box - much to the disbelief of the visitors.

Belhanda got up to take the spot-kick himself, netting Montpellier's first Champions League goal with a nonchalant chip.

Arsenal responded well to trailing for the first time this season - and were behind for less than 10 minutes.

Summer signings Santi Cazorla and Olivier Giroud, playing against his old club, combined with some slick passing on the edge of the Montpellier area to slip Podolski clear - and the German tucked the ball under goalkeeper Geoffrey Jourdren.

Before the home side could regroup, Arsenal struck again on 18 minutes.

This time the damage was done down the right, as the ball was recycled quickly through Gervinho and Giroud out to full-back Carl Jenkinson, who darted toward the line before cutting the ball back across the six-yard box - where Gervinho arrived on cue to bundle in it.

To their credit, Rene Girard's side - who battled against the odds to beat big-spending Paris St Germain to the championship last season - refused to lie down and slowly built up some momentum again.

In the 33rd minute, Argentina forward Estrada - brought in to offset the departure of Giroud - made space for a shot from 20 yards, which Mannone tipped around the post.

Arsenal, though, continued to look menacing through their quick breaks.

As half-time approached, Giroud, who struck 21 goals for Montpellier last season, swept wide after Kieran Gibbs crossed from the left.

Arsenal, though, were almost caught out following the restart when Diaby dithered on the ball inside his own area and was robbed by Cabella, who slammed a shot just wide of the angle.

Montpellier continued to make the most of their dominant spell, as Arsenal were guilty of some stray passing when out to break up possession.

Cabella remained the dangerman, and 10 minutes into the second half he clipped a delightful 20-yard chip against the crossbar.

Diaby then surged through the Montpellier side and played in Cazorla, whose angled drive was beaten behind by the keeper.

Arsenal appeared to have weathered most of the home side's storm.

With 15 minutes left, £12million striker Giroud was replaced by Aaron Ramsey. The France international left the field to general applause, although there were some boos around the unforgiving Stade de la Mosson.

Belhanda spurned a golden opportunity to level with 10 minutes left when some quick footwork sidestepped Per Mertesacker after a cross into the Arsenal box from the right, but he then fired straight at Mannone. 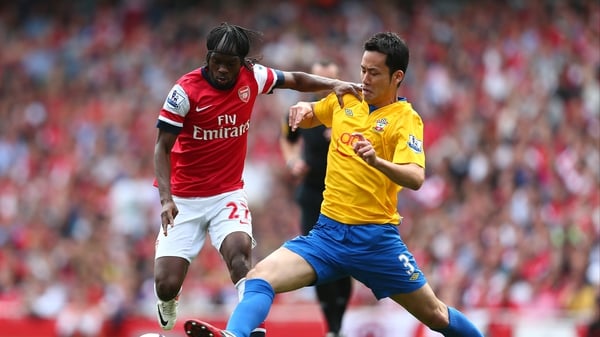