Kevin Doyle thinks Ireland manager Giovanni Trapattoni stands next to no chance of bringing Damien Duff out of international retirement.

Although Duff only called time on his 100-cap career just over two weeks ago, Trapattoni and his assistant Marco Tardelli both said last week that they were hopeful of seeing the winger pull on a green shirt again.

Trapattoni hopes to speak to Duff tonight after the friendly against Oman at Craven Cottage, where the 32-year-old plies his trade with Fulham.

But Doyle, who will skipper the side against the Gulf state, thinks his manager's plea will fall on deaf ears.

"I think from what I have heard Duffers is well and truly in the retired camp," Doyle said with a smile.

"I think he wants to be left alone for a while."

Trapattoni has made 10 changes to his line-up for the match against Oman, with David Meyler and Robbie Brady both making their first appearances.

A number of squad players will also get their chance to show Trapattoni that they can be relied upon should they be required for next month's qualifier against Germany.

Stephen Kelly will start alongside Paul McShane in central defence having been left out of the team for Friday's fortuitous 2-1 win in Kazakhstan.

The 28-year-old hopes to impress the 73-year-old on his 31st outing for his country.

"Hopefully we will get a win and for me it will be a chance to show the manager what I can do," Kelly said.

"Whenever I have been called upon for the qualifiers I have given it my all so I'm glad I'll get a chance to remind the manager what I can do.

"The pressure was on us against Kazakhstan so hopefully there won't be as much pressure for the Oman game and for me it helps that it's at a ground I'm obviously familiar with."

The narrow victory in Kazakhstan, which came courtesy of two last-gasp goals from Robbie Keane and Doyle, did little to appease the doubters who say Trapattoni is the wrong man to lead the side forward after their dismal Euro 2012 campaign.

Darron Gibson, James McClean and Ciaran Clark have all voiced their displeasure at Trapattoni's management in the last two weeks alone, although the Italian claims his relationship with McClean is now good after the Sunderland winger apologised for his foul-mouthed tweet in Astana

Trapattoni, whose side lost all three games and scored just one goal at the European Championship, yesterday found support from Oman manager Paul Le Guen, however.

The poor showing against Kazakhstan has done little to boost ticket sales, with as few as 7,000 people expected to attend tonight's clash in south west London. 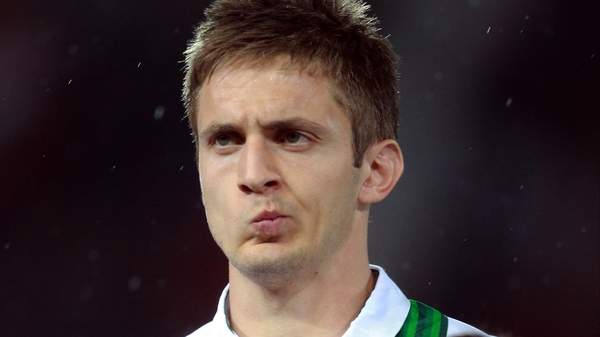