Celtic eased into the Champions League play-offs thanks to goals from Joe Ledley and Georgios Samaras in their third qualifier against HJK Helsinki at the Sonera Stadium.

The Wales international bundled Charlie Mulgrew's cross into the net the 66th minute before Samaras scored five minutes from the end to give the Scottish champions a 4-1 aggregate win and only their second away victory in Europe in 34 attempts.

Celtic will be seeded for the play-off round draw, which will be held in Switzerland on Friday.

Midfielder Victor Wanyama was red-carded in the second-half after picking up the second of two yellow cards but that did not take away from the Hoops' win which would could have been more convincing had skipper Scott Brown, who passed a fitness test on his hip complaint before the game, not missed an early sitter before Samaras passed up on a decent chance moments later.

However, manager Neil Lennon will be delighted to take one step closer to the lucrative group stages of European football's elite club competition.

There had been a lot of focus on the artificial pitch but Celtic, all in black, looked comfortable enough and in the early stages and it was the HJK Helsinki who appeared to have problems judging their passes, especially in defence.

The Scottish champions slowly grew in confidence as the home side's obvious limitations became clear and in the 12th minute Brown should have put the visitors ahead.

Mulgrew's pass beat the HJK defence to find the Scotland midfielder but although his first touch was good, he missed the target from 12 yards with just keeper Ville Wallen to beat.

Less than two minutes later Parkhead wide-man Samaras appeared ready to burst the net when he took a Kris Commons pass but he fired wide of the far post from the edge of the box.

Commons picked up a booking for dissent in the 27th minute from Austrian referee Robert Schorgenhofer for complaining about striker Gary Hooper being penalised again for backing into a HJK Helsinki defender but it looked like a small blemish in what was turning out to be a good performance by the visitors.

Hooper had the ball in the net moments later but the flag was up for offside.

Hoops keeper Fraser Forster might have had to make his first save 10 minutes from the break if HJK Helsinki winger Demba Savage had not taken a fresh air swipe from Sebastian Sorsa's cross to the back post.

Forster was called into action soon afterwards but only to make a comfortable save from Mika Vayrynen's long-distance drive.

In the 43rd minute, with the game flagging, Commons sent Hooper free down the right with a wonderful pass which allowed the former Scunthorpe striker to round Wallen but he ran too wide and the keeper saved the angled-drive at the second attempt.

HJK Helsinki came out for the start of the second-half in more determined mood.

Within two minutes of the restart, 17-year-old striker Joel Pohjanpalo, on for injured Juho Makela, set up Sorsa with a cross from the left but the defender's shot appeared to take a nick off Forster and missed the post by inches, with Celtic surviving the resulting corner.

The visitors had a penalty claim in the 51st minute when Wanyama's header at the back post from Commons' free-kick appeared to strike the arm of HJK defender Timi Lahti but referee Schorgenhofer waved play on.

Mulgrew and Wanyama found themselves in the book for fouls on Joel Perovuo and Sorsa respectively as Celtic's first-half composure briefly deserted them.

Just after the hour mark Forster made a good save from Mathias Lindstrom's close-range header, following a corner by Sebastian Mannstrom.

When play raced up the park moments later Samaras's low cross from the left was put over his own bar, somewhat fortuitously, by HJK Helsinki defender Mikko Sumusalo at the expense of a corner which came to nothing.

Celtic's opening goal came when Mulgrew decided to go on a run down the right flank to link up with Samaras and when his in-swinging cross came into the box Ledley chested it past Wallen from a couple of yards out.

It looked like the visitors were cruising to victory but there was concern with 20 minutes remaining when Wanyama was dismissed after picking up his second yellow card, this time for a foul on Vayrynen.

However, Samaras made sure of the win in the 86th minute when he took a pass from the tireless Ledley and fired low in to the far corner from 10 yards before taking the acclaim of the visiting fans behind the goal. 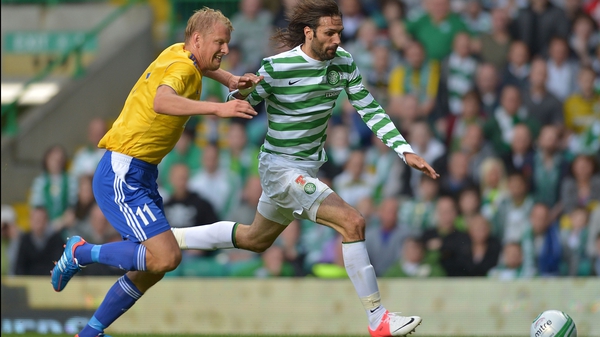