Joey Barton has been stripped of the QPR captaincy and fined six weeks wages following an internal club investigation into his sending off against Manchester City on the final day of the Barclays Premier League season.

Barton, 29, was hit with a 12-match ban and fined £75,000 by a Football Association-appointed independent regulatory commission last month, after being dismissed for elbowing Carlos Tevez, then kicking out at Sergio Aguero as he left the pitch in the match on May 13, before aiming a headbutt in the direction of Vincent Kompany.

Following their own review, QPR have imposed further sanctions on the controversial midfielder, signed last summer on a lucrative four-year deal following a free transfer from Newcastle.

A club statement read: "QPR FC can confirm Joey Barton has been fined six weeks' wages and will no longer be club captain.

"If Barton seriously breaches the club's disciplinary procedures again, the club reserves the right to terminate his contract."

Barton, who is currently away on holiday, will not be part of Mark Hughes' squad for their pre-season tour of Asia in mid-July.

The former Hoops skipper, who earlier this month was arrested for affray following a night out in Liverpool with his girlfriend, issued an unreserved apology.

Barton said in a statement on the club's official website, "My behaviour was wrong and I accept the punishment that has been imposed upon me as a result. 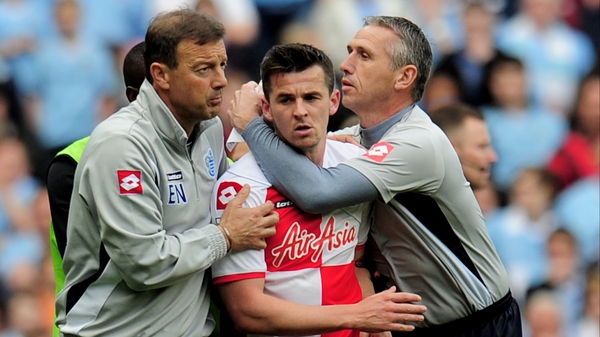