England skipper Steven Gerrard believes Joe Hart will become "the best keeper in the world", while Mario Balotelli has confirmed that he isn’t Peter Pan ahead of the Euro 2012 quarter-final between Italy and England in the Olympic Stadium.

Gerrard gave his glowing testament as England attempt to reach their first major semi-final since Euro 96 when they lost on penalties to Germany.

The Liverpool midfielder has seen Hart grow in stature since becoming established as the England number one since the 2010 World Cup.

Gerrard said: "I think we have got one of the best keepers in the world in Joe and I think eventually he will go on to be the best in the world.

"His performances so far in this tournament have been fantastic and he is going to be one of our key players.

"We need Joe to perform at his maximum because at some stage in the game or in extra-time or if it goes to penalties, he is going to be called upon to make a fantastic save. We all think we can do it."

Gerrard is aware of the importance of himself and Scott Parker getting to grips with the midfield trio of Andrea Pirlo, Daniele de Rossi and Claudio Marchisio.

He said: "Italy have some fantastic midfielders. Pirlo has proved he is one of the best midfielders out there.

"De Rossi can see a long pass and score goals. Marchisio is a bit of a different player and runs into the box more.

"But they are all threats and it is up to Scott and myself to control the midfield because they are three superb players. If they get control of the game, we are in trouble."

Gerrard knows England will have to contain Mario Balotelli if he is recalled to the starting line-up by the Italians.

The controversial Manchester City man came off the bench to score against the Republic of Ireland on Monday, and is rarely far from the action.

Gerrard said: "We all know about Mario, we watch him week in and week out in the Premier League. He`s an excellent and dangerous player.

Balotelli, meanwhile, was asked to discuss the claims of his agent that he is the Peter Pan of Italian football, which came in the wake of team-mate Daniele de Rossi admitting he thought Balotelli was growing up.

The Manchester City striker said: "These are two metaphors for Mario the person not Mario the footballer. I think I'm a man but I don't think I need to say it. Mino said I'm Peter Pan because he wants to make people laugh.

Balotelli was also asked if he was going to demonstrate to England if there was "a stupid Balotelli or a super Balotelli" after showing his prowess with the late goal against the Irish.

He added: "I don't think Mario the person needs to demonstrate this to anyone because those who know me know exactly what I'm like.

"It was an important goal I scored against Ireland because I hadn't got on the scoresheet in the past two games.

"You said I was having a problem putting the ball in the net but I didn't have any psychological problems. There is no mental block there at all."

Balotelli also insists he has no issue with his team-mates despite becoming frustrated at failing to score before his hooked volley against Ireland.

He said: "The national side has always meant a lot to me since when I was a kid. That is normal.

"In the first few games I was very emotional because it was my first European Championships so that is normal.

"I was bit worked up because I hadn't scored a goal.I wasn't angry, I didn't have problems with the squad. I'm fine. The only thing was that I didn't score a goal." 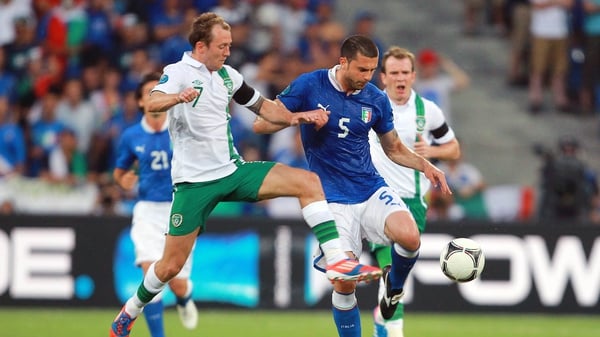