Republic of Ireland goalkeeping coach Alan Kelly has indicated that Shay Given will be fit to start the team's Euro 2012 opener against Croatia on Sunday.

The Ireland keeper, who has been nursing knee and calf problems, sat out yesterday's open training session at the Municipal Stadium in Gdynia.

Speaking to the media in Sopot, Kelly insisted he has no doubt about Given's participation in the game in Poznan and opined that he would play if the game was tonight.

Kelly said: "He's fine. We had the open day yesterday in front of a really fantastic crowd, as you saw, and it's just part of his rest and recuperation.

"He played the 45 minutes the night before. I don't know if you noticed, but we were playing head tennis over in the corner and having a bit of craic with the crowd.

"I had to put the old reins on him and keep him back. We had travelled overnight and it's nothing out of the ordinary, really.

"Anybody who has seen Shay over - what is it, 122 caps, now? - and his determination to play for Ireland, that's not going to go away.

"To play in the big championships, it's a bit of a cliche, but nobody more so than Shay is desperate to play on Sunday. I don't think wild horses could keep him from being on that pitch.

"I think his determination and the willingness has shown over 16 years to pay for Ireland now is not going to go away overnight."

Given's return from the knee injury that saw him visit specialist Andy Williams in London has led to other injuries as his body readjusts after the lay-off.

Kelly believes that the calf strain is not a major issue and cited Given's performance in the first half against Hungary as an example of how unhindered he is by it.

He said: "It's like anything, one you get a little niggle with the knee, as he did, you are going to get some compensatory issues that you get when you come back training.

"But anybody who saw the game the other night and his performance and the saves he made, you wouldn't question his fitness, his form and how sharp he is.

"Obviously, my job as goalkeeping coach is to get him to that level, and he wouldn't be able to do that if he wasn't fit."

Given is "busting" to get back to training, according to Kelly, and he expects him to do so before the weekend.

In response to questions about the dangers of playing Given in Sunday's game, Kelly said his participation will not jeopardise his chances of playing against Spain or Italy.

"If you go out on to the pitch, you might say injuries can happen - anything can happen on the pitch. But once you go over the white line, you are fit and you have put yourself forward.

"Another thing about Shay, in terms of his integrity and honesty, he wouldn't do that if it meant it would in any way impair his performance.

"You have got to keep in mind the fella that you are talking about and the iconic nature of him.

"He wouldn't want to do anything that would lessen our chances. He is a professional of the highest integrity and I have no qualms or no problems with him going forward and playing on Sunday."

A number of players, particularly Aiden McGeady, had complained of tiredness after the Hungary game and the squad were given today off.

Kelly said the decision "made sense" as the players needed time to recover from the exertions of the Hungary game and the overnight flight from Budapest to Gdansk.

He also insisted that the decision was made by the coaching staff and not prompted by the players' comments.

"You think, we played Hungary, obviously the delayed kick-off, so it got to 9pm. We landed at 3.30am in the morning and we had the open day yesterday as well," he said.

"It just made sense. If you think about a normal week within a club structure, the Wednesday before a game, you would get the day off, so the manager decided the lads could have a day off.

"That day off doesn't consist of being able to wander off willy-nilly. It's in and around the hotel.

"Like I said before, it's rest and recuperation and all that entails. Then we have got Friday, Saturday, time to recover, time to get ready, and then obviously, we are getting into the main tournament.

"It's never a case of going hell for leather three days in. You build up."

Ireland are favourites to finish bottom of the group and one of the long shots to win the tournament outright.

But Kelly highlighted their away form and the spirit and unity in the camp as reasons Ireland can do well in the upcoming "three away games".

He said: "The one thing about this group is that we've already been away three weeks. If you have not got really tight unity within the squad little cracks might show.

"They have got such a belief. If you look, we are unbeaten away from home and if you want to look at it simply we have got three away games. That's how we look at it.

"We perform so well away from home are we are sort of set up for it. We beat the Italians last year in Liege. We have got such an inner belief. It sounds easy to say here, but they have backed it up with the results they have got away from home.

"We don't want to shout it from the rooftops, but we go out thinking and knowing that we can get results. That is what we are going to take into the three games. It is not a case of just turning up."

In a casual and relaxed press conference at the main media hotel near the team's base on the northern Polish coast, Kelly recalled this experience of being a player at major tournaments.

Second choice behind Packie Bonner at USA 94, Kelly was Given's back-up by the next time Ireland reached another major tournament eight years later.

He said the preparation for Euro 2012 is "as far away as you can imagine" from what he experienced in 1994.

"I think we went out to Florida. Orange County we were based in," he recollected. "We weren't allowed water during training sessions for 90 minutes.

"I remember me and Packie [Bonner] had three or four tops on. It was 90C, 80% humidity and I think we averaged between 16 and 18 pounds a day in weight loss in sweat because we trained twice.

"It was just totally different. You look at the facilities. The hotel is absolutely fantastic over here. It is a great spot as well.

"One thing I remember is that we used to train in 94 in the morning. You would lose your eight or nine pounds and the doc would come in and say for every pound you'd lost you had to drink one of these (points to bottle of water).

"He would line them up. It was like Cool Hand Luke with the eggs. You never actually recuperated. You looked at it and thought I'll have a couple.

"Another I remember is touching the grass when we dived on it. It was absolutely boiling. I remember Jack saying to sit down. The lads sat down and jumped back up."

Kelly was a witness to the drama in Saipan and is disappointed that it overshadowed the good work done by the team and the welcome received in Izumo afterwards.

He said: "What is overlooked from 2002 is when we went to Izumo. The facilities we had there and preparations that went from there were absolutely superb.

"Two things that are similar are the welcome we got from the people in Japan was absolutely fantastic. They couldn't do enough for us.

"You saw yesterday the welcome we got, especially from the local people, was unbelievable. Absolutely fantastic.

"The one memory for me up to now is when we were driving away from the stadium and they were lining the streets and waving. All the kids were happy and it was fantastic and that is what it is about. Brilliant." 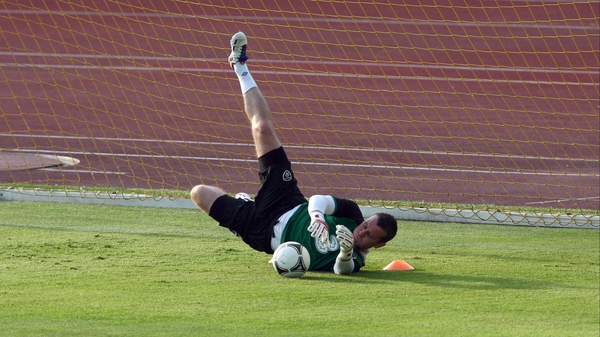 Shay Given believes the friendly in Hungary is an important stepping-stone to Euro 2012.