Republic of Ireland manager Giovanni Trapattoni has no fears about naming his team for the opening Euro 2012 game against Croatia seven days in advance.

Trapattoni was confident enough to confirm that his first choice players would start tomorrow night's friendly against Hungary and the game in Poznan next Sunday.

As expected, Shay Given will start in goal behind a back four of John O'Shea, Sean St Ledger, Richard Dunne and Stephen Ward.

It is the tried and trusted quartet of Aiden McGeady, Glenn Whelan, Keith Andrews and Damien Duff in midfield.

Speaking in the Ferenc Puskas stadium in Budapest, Trapattoni said he is not concerned that Slaven Bilic already knows the starting team, believing the declaration will not come as a surprise to the Croatians.

Trapattoni said: "I have already said the team that starts tomorrow will be the same that will start against Croatia, unless there are some unexpected circumstances.

"That is the team that allow us to achieve qualifying. All the team is in good form. We couldn't change. It is consolidated.

"We play with closed eyes, that is my guarantee. Also when we need to change, the other players played very well. I couldn't change because all players are playing very well.

"I watch DVDs and we have scouts in every game. Other managers watch and they see the games our team played. It is not only the last 90 minutes. They know all about us. We know all about them," added the 73-year-old.

The Italian highlighted the importance of working on set pieces as a key factor in telling his players and the media the team this far away from kick-off.

He said: "Today in football there are many, many goals that are scored from set pieces. You need to use the team that will play. I have to use my first team to try out the set pieces."

Trapattoni also does not believe other players will be disheartened by their absence from the line-up, saying it will push them to work harder to get into the team.

Captain Robbie Keane has backed the manager's decision to announce the team so soon and feels it suits the players.

Keane said: "Since the manager has taken over, he has been very comfortable in naming is team the day before games.

"I have played under a lot of managers who are very, very concerned about naming the team until an hour-and-a-half before the game because of players knowing other players from different teams and speaking to them.

"The manager has always done it like that and as a player, it's always good to know that you're playing, so I am sure the lads will take great confidence from that."

Ireland are on a 13-game unbeaten run, and while the Italian is keen to maintain that form, he is just as concerned about arriving in Poland on Tuesday with a fully fit squad.

Trapattoni warned his players not to take too many risks, notably the players who are only just over injuries, such as John O'Shea and Shay Given.

"It is very well if we continue this way because it is a possibility to play a friendly game," he said.

"It is important that we no run the risk. Every player can understand that this is a risk.

"It is a friendly. When you got to put the leg in you wait because you know there is a moment when I can think for one second no make this tackle. That is important.

"This is the last game in preparation for the Euro. I would like to see the same performance, the same enthusiasm, the same fluidity in the game that we have seen against Bosnia and also in training last week."

Trapattoni said last week that Given and O'Shea must prove their fitness to make the final 23-man squad.

Both players got some time on the pitch at the training camp in Tuscany, but Trapattoni admitted that he would be happy for O'Shea to play just 70 minutes against Hungary.

"That is the test for him and I'm sure now he is ready. After the game hopefully we can say he is okay and is 100%.

"Maybe not 90 minutes. Maybe it is good he gets just 70 minutes. It is no problem. I think about Croatia." 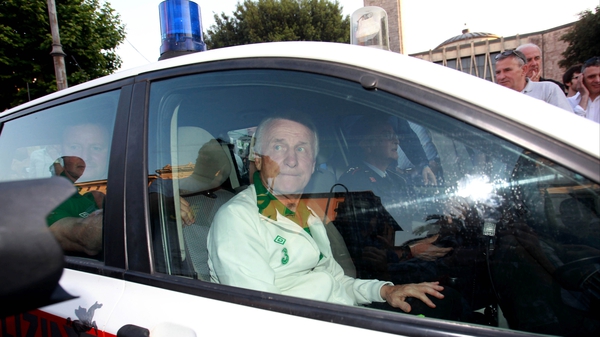