Wolverhampton Wanderers and Republic of Ireland winger Stephen Hunt has said that the decision to sack Mick McCarthy was the wrong one.

Wolves chairman Steve Morgan sacked McCarthy at the beginning of March after a 5-1 home defeat to West Brom. The club are currently bottom of the league table, five points behind closest rivals Blackburn.

Commenting on the sacking of McCarthy, he said: “We were all playing for the manager so first of all, it was disappointing for the gaffer. In terms of results, the board thought it was time for a change.

"Little did we know we would end up losing a lot of games since we’ve sacked him so it has probably proved to be the wrong decision in the end.”

Hunt expects McCarthy, who brought him to the club from Hull in 2010, to get another big job in football.

He added: "Mick will go on and do well for himself. He has got a good enough CV to get another job for sure and he is definitely good enough to work for. I’m sure he will be back with a vengeance. It is just disappointing for us that we lost him."

Wolves have a difficult run-in, with title-chasing Man City up next on Sunday before clashes with Swansea, Everton and Wigan.

"We won’t give up. It is a tall ask to win four games in a row. We have Man City next up. One thing is for sure, we have a good honest bunch of lads and we’ll continue to fight and if we get the three points it might just rejuvenate us and get (us) a bit of momentum. Hopefully it is not too late."

Wolves will not be giving up under new manager Terry Connor, though Hunt admits he was surprised when the former first team coach was given the top job.

He said: "I didn’t think he (Connor) would get the job initially. Neither did he to be honest with you.

“In terms of when he took over, we thought ‘oh, it’s not going to change’ to a certain degree, that it would be the same as under the old manager, but to be fair he has come in and stamped his authority and changed things around. Maybe he has even made the players a bit happier in terms of what he has done for us.

"But maybe it was better sticking with Mick, but in fairness to TC, he is good to play for and we will all play for him to the bitter end."

The team has been dogged by rumours of training ground unrest, but Hunt insists they have no excuses for their poor performances and should be higher up the league table.

He said: "Monday to Friday, we all get on very well. I think on Saturdays, when we have lost a lot of games, things can be a little bit heated. If you come in after a game and you have lost you are not going to be happy.

"You want to have it all out on the table, open and honest with each other. We should do better. We have said that in the last six or seven weeks.

"We should be higher in the League. We have no excuses. We have trained as we have wanted, we have all the facilities and everything is perfect but we haven’t produced as a team. We have to take it on the chin and move on."

Hunt hopes to return soon after opting to have an operation on a hernia and could even be in line to play against Man City on Sunday, which is good news for both club and country.

He said: "I am progressing well, I hope to be back in training in four or five days’ time. The injury was a hernia, a recurrence of one I had last year.

"It didn’t bother me for a couple of months but then I decided to go ahead and have the operation, which is better for me. I hope to be back for Manchester City next week, but maybe Swansea the week after to be safe."

Competition for places in Giovanni Trapattoni’s Euro 2012 squad is keen but Hunt has welcomed the impact of Sunderland sensation James McClean this season.

He added: "Anyone who is an Irish fan welcomes the pressure on the players because obviously that brings competition for places. 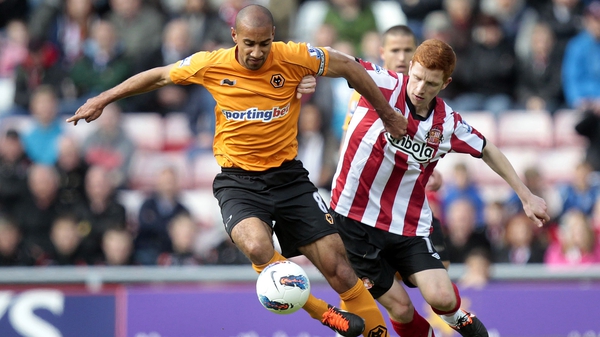