Liverpool's much-maligned record signing Andy Carroll went some way to justifying his price with the goal which gave his side a 2-1 victory over Everton in their first FA Cup semi-final clash at Wembley.

The £35million striker had endured a testing afternoon but came up with the winner four minutes from time at Wembley.

Everton went ahead following a first-half defensive blunder which gave Nikica Jelavic a simple chance. Luis Suarez levelled matters in the second half before Carroll headed the winner.

It could be argued the failure of Carroll to score consistently partly contributed to the removal of director of football Damien Comolli by American owners Fenway Sports Group in a ruthless move on Thursday.

Manager Kenny Dalglish has steadfastly defended his big striker despite all the criticism.

Both the Reds boss and the 23-year-old forward will be hoping such a significant goal in Liverpool's season - hopes of Champions League qualification having been ended by a woeful run of results - will be a turning point for both of them.

Having already won the Carling Cup in February Liverpool remain on course for a cup double, which has only been achieved three times previously - and once by themselves.

Past experience favoured Liverpool against Everton at Wembley in this competition, having had two FA Cup final wins against their near-neighbours in 1986 and 1989.

Of the four FA Cup semi-finals the teams had contested, Everton had been victorious in only the first in 1906 and they went on to win the competition.

But the history did not weigh heavy on the Toffees, who had the better of a relatively incident-free first half with neither goalkeeper having a proper save to make.

That statistic would have been different had Jay Spearing not snatched at a third-minute chance after Andy Carroll had worked space to cut the ball back to the edge of the area.

With no goals in 48 previous matches of his Liverpool career Spearing was the last man the Reds would have wanted to see in a shooting position and he lived up to expectations by firing over.

Everton had two off-target free-kicks from Leighton Baines and Jelavic, who also had an overhead kick saved by Brad Jones, while Martin Skrtel shot tamely at Tim Howard after Steven Gerrard had picked out Carroll.

It may have been no real surprise the opening goal came from a mistake but the source of the error was.

Carragher, a veteran of 696 appearances, hesitated along with stand-in left-back Agger when the ball dropped in the penalty area and when the vice-captain eventually decided to deal with it he succeeded only in driving it at Tim Cahill.

The rebound fell favourably to Jelavic who coolly slotted a shot between the legs of a diving Jones to spark wild celebrations from Moyes on the touchline.

Carroll looked like he was to have one of those afternoons which have been all-too-regular since his January 2011 move from Newcastle with a glaring miss just two minutes into the second half.

Stewart Downing's inviting cross to the far post was headed wide from close range, prompting the striker to rightly hide his face under his shirt and his manager put his head in his hands.

Fortunately for Carroll strike partner Suarez is sharper in front of goal, especially when gifted opportunities like the one in the 62nd minute.

The otherwise-excellent Sylvain Distin badly mis-hit a backpass from wide on Everton's left and the Uruguay international raced into the area to slide a low shot with the outside of his right foot past Howard.

Carroll was at it again in the 78th minute, dragging wide left-footed from a good position but Jelavic, who at £5.5million already looks a bargain, was much closer in drilling a shot into the side-netting.

Suarez got in the way of another Carroll effort which bounced wide before Everton substitute Seamus Coleman, booked soon after coming on, was lucky to escape a second caution when he clattered into Gerrard but Liverpool took full advantage.

Craig Bellamy, on for Downing, whipped in the 86th-minute free-kick and Carroll flicked in a header.

Liverpool could even afford for another substitute Maxi Rodriguez to hit the post from close range as they booked a third appearance at Wembley in three months and kept their season alive.

For Everton, however, their priority now will be finishing ahead of their local rivals in the Barclays Premier League, something they have done only once since its inception. 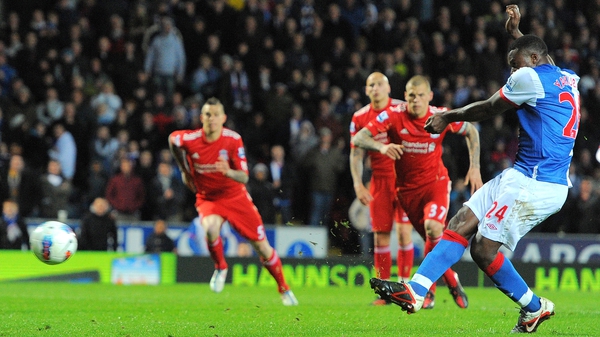