By Rory Houston in Tallinn

A stunning performance from the Republic of Ireland all but sealed
progress to Euro 2012 as they crushed nine-man Estonia 4-0 in the first leg of the qualifying play-off tie in A Le Coq Arena in Tallinn.

Keith Andrews opened the scoring in the 14th minute and second-half strikes from Jon Walters and Robbie Keane (two) destroyed Estonia’s hopes, as they finished with nine-men after Andrei Stepanov and Pirroja were dismissed.

The scoreline did not flatter Ireland who produced a composed,
classy and determined showing that will go down as the highlight of the Giovanni Trapattioni era so far.

The return leg is on Tuesday night in the Aviva Stadium but reaching the major championship is now close to a formality.

Walters was named in the starting line-up ahead of Simon Cox with Seamus Coleman a noticeable absentee from the bench.

A wonderful atmosphere was building in the stadium long before
kick-off ahead of a historic night for Estonian football, and a
defining one for the Trapattoni Irish tenure.

Walters tried a long range shot in the third minute as he opened the game sharply, linking well with Robbie Keane, but goalkeeper Sergei Pareiko gathered the ball with ease.

Ireland dominated possession in the opening 10 minutes and settled into the game considerably better than the hosts.

Estonia, however, did threaten shortly afterwards as Konstantin
Vassiljev’s shot deflected off Andrews and landed on the roof of Shay Given’s net.

The Aston Villa man claimed the resulting corner and soon Ireland were to make the breakthrough.

With 14 minutes on the clock, Walters and Keane combined to feed McGeady down the left wing. He checked back and dinked the ball into the area for Andrews to head past Pareiko.

Stepanov was then booked for a late tackle on Andrews and
that would later prove very costly.

The lead could have been doubled three minutes later as St Ledger headed the ball into the middle of the box and Walters turned and shot over the crossbar.

Estonia were struggling to get to grips with the game while Ireland were showing a composure and guile that demonstrated their experience in play-off ties.

Tarmo Ruutli’s side did offer a bit more in front of goal in the next
stages as Ragnar Klavan shot well wide from 25 yards out.

Given was at full stretch a minute later as a magnificent effort by
Vassiljev went just past the post.

Stephen Ward then had to time his tackle excellently to deny Tarmo Kink as the Wolves winger slid the ball out of play before the Estonian could attempt to beat Given.

McGeady and Walters were a constant danger to Estonia and as the game reached the half-hour mark, Giovanni Trapattoni had plenty of reasons to be pleased with his side’s work so far.

The home supporters were desperate for their team to get back in the game, erupting into deafening noise any time they got close to the Irish penalty area, but the Boys in Green were coping relatively well at the back.

Walters outpaced Raio Piiroja from a long ball forward and curled a powerful shot over the crossbar from a tight angle in the 33rd minute.

Stepanov was then given a second yellow card for a late tackle on
Robbie Keane after a mistake in the Estonian defence.

Whelan blazed the free-kick away from the home goal but Ireland now had the platform to kill off Estonia in this leg.

The end of the opening period was relatively quite as Vassiljev’s
desperate shot from well outside the penalty area flew into the stand housing the Irish supporters and then Ward’s cross was gathered by goalkeeper Pareiko.

In the 49th minute Robbie Keane had hit first chance of the game as his attempt 12 yards from goal was blocked by Pirroja and then Duff slid a slow shot straight at the goalkeeper from the rebound.

McGeady and Ward were combining brilliantly down the left wing as the beginning of the second period was dominated by the away team.

Stephen Kelly was adjudged to have brought down Martin Vunk on the corner of the penalty area in the 54th minute in a worrying moment for the Republic with Dunne deflecting the free-kick just wide of the post. Piiroja’s turn and shot didn’t trouble Given from the corner.

Estonia made two substitutions and remained very much in the match as the hour mark was passed and they coped well with deep crosses from first McGeady and then Duff.

A spate of free-kicks disrupted the course of the game as Ireland went in search of a second goal but it came in the 67th minute, thanks to the wonderful work of Jon Walters.

The Stoke forward won the ball and laid it off to Keane who then gave McGeady the chance to test Pareiko.

The former Celtic winger’s shot was pushed towards Keane who looped the ball to the back post for Walters to nod home, despite the efforts of the Estonian players on the goal-line.

As the Ireland fans began to dream of Euro 2012, it was left to the LA Galaxy forward to notch another telling goal in a magnificent international career and kill off Estonia.

Keith Andrews’ powerful free-kick from 30 yards was only deflected to Keane to slot home and that all but ended the tie as a contest.

The Estonian nightmare continued as Piiroja was dismissed for a second yellow, cleverly won by Keane’s persistence and keen appeal for the referee Viktor Kassai to reach for a card when at first he looked reluctant.

Trapattoni could afford to rest Glenn Whelan, Damien Duff and Walters in the closing stages and with just minutes left thoughts were focused on hitting a fourth goal against the nine-men.

It arrived with just two minutes left as substitute Ats Purje’s late
tackled on fellow replacement Stephen Hunt allowed Keane to stroke home a penalty on a memorable night for the Republic.

FAI Chief Executive John Delaney concluded triumphant celebrations on the pitch in Tallinn, with the Irish fans ready to party and plan a trip to a major Championships for the first time in 10 years. 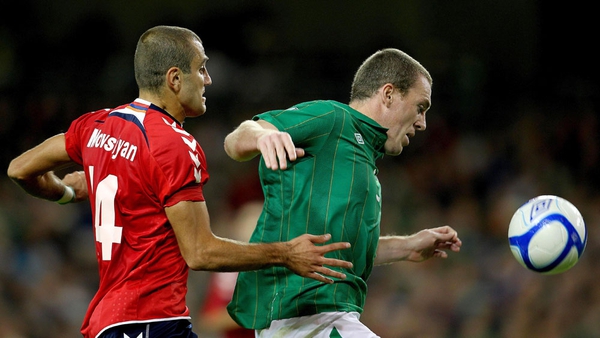 As it Happened Ireland 2-1 Armenia