Ciaran Kelly proved Sligo Rovers’ penalty hero yet again as they retained their FAI Ford Cup in dramatic fashion at the Aviva Stadium.

Kelly saved four spot kicks in last season’s decider and he worked the oracle once again, having come on as a tactical masterstroke substitution in the final minute of extra-time.

It was a huge gamble by boss Paul Cook, but it paid off as Kelly saved penalties from Kevin Dawson and Colm James before Raffaele Cretaro slotted home the winning spot-kick.

The result was dreadfully harsh on newly-promoted Shelbourne who played for 90 minutes with ten men.

Shelbourne comfortably survived some early Sligo probing and put the holders on the back foot as they had a big shout for a penalty on nine minutes in the first real opening of the game.

Sligo midfielder Danny Ventre was robbed in possession in a dangerous position. The ball then broke for Philly Hughes whose shot struck the upper body of defender Gavin Peers. Despite loud appeals for a handball, referee Richie Winter waved play on.

But those jeers of derision from the Shels fans in the Havelock Square end turned to delirious cheers as a Shels bout of pressure brought them the lead on the half hour.

As a foretaste, Barry Clancy got in front of Sligo right-back Alan Keane to head a Brendan McGill cross off the bar on 28 minutes.

A poor clearance from Sligo keeper Brendan Clarke was returned promptly first time by John Sullivan. Hughes was fully alert to pounce, racing through to touch the ball past Clarke.

A shocking decision six minutes later would cast a shadow over what was an intriguing final. 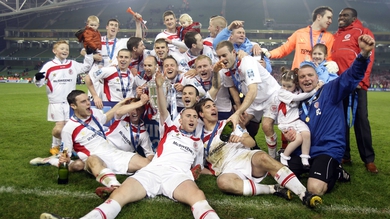 Clancy, just booked for a foul on John Russell, was harshly sent off by Winter for diving, despite clear contact from Russell as he raced through onto Hughes’ pass.

Sligo didn’t have much longer to wait to get back into the game as they were level within three minutes of the second half. Danny Ventre laid the ball off for the run of left-back Iarfhlaith Davoren whose terrific low drive beat Delaney at his near post.

If Delaney was at fault for the goal, he made amends on 61 minutes when standing up well to prevent substitute Matthew Blinkhorn from scoring with his first touch from Ryan’s clever free-kick.

Blinkhorn was in on goal again nine minutes later, with Andy Boyle getting across to make a terrific block.

Try as they might, Sligo failed miserably to break down Shels who heroically forced extra-time.

Kelly, who replaced Clarke in the final minute of extra-time, then proved Sligo’s hero in the shootout.