Lionel Messi and Cristiano Ronaldo both struck their second Primera Division hat-tricks of the season as Barcelona and Real Madrid each got back to winning ways with big home wins over Atletico Madrid and Rayo Vallecano, respectively.

Ronaldo helped 10-man Real Madrid end a disappointing week with a 6-2 derby triumph over Rayo Vallecano, while Messi's treble led Barca, having drawn 2-2 at Valencia in midweek, to a 5-0 mauling of Atletico Madrid.

There had been talk of crisis at Madrid after Jose Mourinho's men dropped five points away at Levante and Racing Santander this week, and the nine-time European champions looked in more trouble as they fell behind after just 14 seconds tonight, Miguel Cuesta the scorer.

Three goals in 13 minutes either side of half-time from Ronaldo (two) and Gonzalo Higuain looked to have put Madrid back on track, but they found themselves with more problems soon after when Cuesta pulled a goal back and winger Angel Di Maria was sent off for a second booking.

That left Madrid facing the final half-hour with just a one-goal lead and a man less, but the home fans had no need to worry as strikes from Raphael Varane, Karim Benzema and Ronaldo completed an ultimately comfortable victory.

Ronaldo's final effort, which was his second from the penalty spot, completed his second treble in five league games this season - having netted seven in all competitions last term.

Messi, who finished second behind Ronaldo in last season's scoring charts, was not to be outdone however and he added three more goals to the hat-trick he scored in last weekend's 8-0 thrashing of Osasuna - taking his tally to 12 hat-tricks in Barca colours.

Atletico went into their trip to the Nou Camp on the back of successive 4-0 home wins and with new record signing Radamel Falcao having struck five times, but the Rojiblancos' hopes of causing an upset lasted less than half-an-hour as Barca raced into a 3-0 lead.

David Villa opened the scoring in the ninth minute before Atletico defender Joao Miranda deflected the ball into his own net to make it 2-0 six minutes later.

Messi then added a third in the 26th minute with a trademark individual goal before the Argentinian completed the scoring with two late efforts to leave Barca in second place, a point above Madrid and one behind leaders Real Betis, who face Getafe on Monday night.

Kanoute put Sevilla in front on 18 minutes after being sent clear by Jesus Navas.

Sevilla should have been more than one up at the break but were denied by Vicente Guaita on numerous occasions and the hosts were nearly made to pay for those wasted opportunities as first Piotr Trochowski and then Julien Escude were sent off.

Escude's dismissal also resulted in a penalty for Valencia which Ever Banega hit against the post before the visitors were also reduced to 10 men for Aritz Aduriz's apparent stamp on Emir Spahic.

In tonight's other game, a second-half equaliser from Villarreal's Nilmar cancelled out Igor Gabilondo's goal for Athletic Bilbao and ensured the Basque side's winless streak in the Primera Division under new coach Marcelo Bielsa continued. 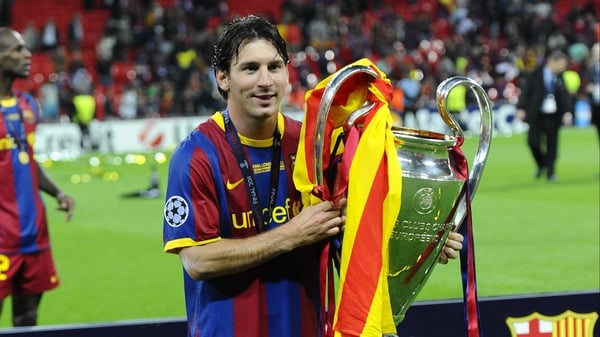