As it Happened: Republic of Ireland v Russia

Shay Given and Richard Dunne frustrated Russia as the Republic of Ireland turned in a battling performance to snatch a point in Moscow.

Given produced three fine saves, the last of them a stunning 88th-minute stop from midfielder Konstantin Zyryanov's diving header, to extend his side's record run of clean sheets to seven.

But it took a remarkable goal-line block by Dunne to deny Igor Semshov before the break and another to keep out Roman Shirokov after it as the Russian assault ultimately came up short.

The Aston Villa defender finished the game wearing a makeshift number five shirt after being made to remove the bloodied original, with staff have to draw the number on a blank one using a marker pen.

But that may now be one of his proudest possessions after he led a gutsy rearguard action which keeps Ireland's hopes of automatic qualification from Group B alive.

Russia remain two points better off, but must travel to Slovakia next month, while Giovanni Trapattoni's men will end their campaign with a trip to Andorra and Armenia's visit to the Aviva Stadium.

They were certainly the happier as they left Moscow with a point for the first time, although they will know there is still plenty of work to be done if they are to pip the Russians to top spot.

Trapattoni flew out to Moscow on Sunday having left injured trio Kevin Kilbane, John O'Shea and Shane Long behind along with the suspended Sean St Ledger, and he had doubts about Given, Dunne and skipper Robbie Keane as they nursed troublesome niggles.

However, the Italian's senior statesmen kept their side in the game as the group leaders launched a sustained assault which should really have paid dividends.

Former Chelsea midfielder Yuri Zhirkov was a menace on the left hand side of an attacking midfield trio, while Arsenal's Andrey Arshavin and the hugely impressive Semshov were mesmeric as they dragged their Irish counterparts all over the field.

But as so often during Trapattoni's reign, what his players lacked in quality, they made up for in effort, commitment and a sheer bloody-minded refusal to concede.

Given had to dive low to his left to turn away Arshavin's eighth-minute shot after Stephen Kelly had denied Zhirkov with a well-timed challenge, and was then sent sprawling in the opposite direction by Semshov's acrobatic 22nd-minute volley after striker Aleksandr Kerzhakov had picked him out with a right-wing cross.

The midfielder's cross left Semshov with a seemingly simple task, but he could not believe his eyes when Dunne turned up on the line and somehow blocked his shot.

Russia battered away at Ireland, who had only one shot of note during the opening 45 minutes when Kevin Doyle fired straight at keeper Vyacheslav Malafeev, but the hosts were repeatedly thwarted by dogged, if not always textbook, defence.

Given needed the help of a post to keep out Zhirkov's corner on the stroke of half-time, and Damien Duff hacked a Sergei Ignashevich header off the line in the dying seconds to send the visitors in at the break level, although perhaps not sure quite how.

Dunne save Ireland once again within three minutes of the restart when he threw himself in front of Shirokov's shot at point-blank range after Arshavin had slid him in.

Arshavin whipped a dipping shot just over the bar and then opened up the Ireland defence once again to present Semshov with a glorious opportunity to open the scoring.

However, instead of shooting, the midfielder rolled the ball square, expecting substitute Roman Pavlyuchenko to provide the finishing touch.

But the Tottenham man had not anticipated the pass and the ball ran harmlessly across the penalty area and was cleared as the Republic's luck held.

Substitute Diniyar Bilyaletdinov skied horribly over the bar six minutes after coming on as a 76th-minute replacement for Zhirkov, who was injured as Dunne's challenge sent both players clattering onto the running track and also resulted in the Irishman's facial wound.

The drama was far from over, and there were two minutes of normal time remaining when Zyryanov dived to meet a cross with a firm header just yards out but Given somehow managed to repel his effort.

The ball fell to Semshov as the Russian was given a chance to atone for his earlier profligacy, but Keith Andrews made a last-ditch block to ensure Irish pride - and their clean sheet - remained intact. 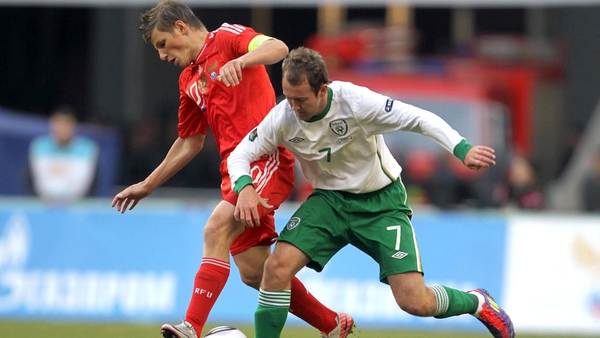 Russia 0-0 Ireland - As It Happened Soccer