The Republic of Ireland stretched their unbeaten run to five games with a scoreless draw against Croatia in front of a disappointing 20,179 crowd at Aviva Stadium.

In a match notable for a lack of clear-cut chances, the closest the home side came to breaking the deadlock was when Richard Dunne headed Sean St Ledger's cross well wide of the target after finding himself unmarked just eight yards from goal.

The best chance of the game fell to Croatia after 27 minutes when Vedran Corluka set Darijo Srna free down the right wing. The Shakhtar Donetsk player’s pullback found an unmarked Niko Kranjcar but his effort from 10 yards flew over Shay Given’s bar.

Croatia were sloppy in midfield in the opening stages.

Firstly, Glenn Whelan got in ahead of Luka Modric and then Damien Duff collected a loose pass and found Darron Gibson but the Manchester United player shot straight at Stipe Pleikosa.

In the tenth minute, Keane turned defence into attack finding Shane Long with a 50-yard pass. The West Bromwich Albion man in turn found the supporting Glenn Whelan but his touch was too heavy and keeper Pleikosa cleared.

After 15 minutes Modric’s clipped ball found the onrushing Ivan Strinic. Stephen Kelly then seemed to climb all over the Dnipro full-back as he prepared to pull the trigger but the referee waved play on.

Keane and Duff combined in the 21st minute to put Stephen Hunt through but the Wolves man ran out of space before he could get a shot in.

Two minutes later, Whelan’s curling cross was met by Long but the striker’s well-directed header was comfortably saved by the Spurs reserve keeper.

In the 27th minute, Mandzukic skipped inside Dunne and found himself with plenty of space to get a shot off. Instead he tried to pick out Eduardo but Stephen Ward read the danger to clear.

Moments later, the former Bohemians player was again in the right place to clear after Strinic had skipped past Duff on the left hand side.

Just before half-time Keane picked the ball up outside the box and skipped past Lovren with ease. But the Tottenham player couldn’t get any power behind his shot and Pleikosa again saved comfortably.

The standard of finishing on display even seemed to effect the half-time entertainment as none of the participants in the ‘Crossbar Challenge’ could find the target either.

Even the introduction of Bayern Munich’s Ivica Olic wasn’t enough to spark the game into life and the second half provided even less for the for the small but vocal away support to shout about.

In the 53rd minute Modric tried a spectacular volley from Corluka’s cross but the midfielder’s execution was poor.

Minutes later Gibson gave the ball away in midfield and was then booked for a clumsy tackle from behind on substitute Ivica Olic, precipitating a small scuffle, which was one of the more lively moments of the game.

From the resulting free Srna found Lovren unmarked at the back post but the Lyon defender couldn’t wrap his left foot around the ball and Given remained a spectator.

In the 82nd minute, Olic headed the ball down for Kalinic who found Srna on the edge of the box but he dragged his shot wide.

Moments later, Kalinic’s spurned another chance to grab the win when his weak shot was easily saved by substitute keeper Keiren Westwood.

In truth, any competitive edge that was left in the game had disappeared from Dublin 4 about ten minutes into the second half as both managers began to make changes. The sense that the players had bigger games, not least their club fixtures, on their minds, was palpable.

Getting back to winning ways against Slovakia on 2 September is all that matters now for Giovanni Trapattoni. Russia away is a different matter. 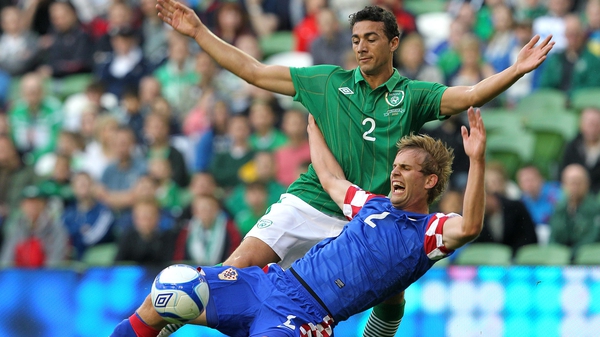 As it Happened: Republic of Ireland 0-0 Croatia