Anthony Stokes and Gary Hooper both scored twice as Celtic beat the Airtricity League XI 5-0 in the Dublin Super Cup at the Aviva Stadium.

Stokes put Celtic ahead with a close-range effort that deflected off Aidan Price. Daryl Murphy bagged a second from the penalty spot after Danny Ventre's handball.

The home side went chasing the game late on and were caught out by three goals in the last seven minutes.

Hooper produced two neat finishes in a minute before Stokes rounded off the scoring with a fine individual effort.

Daniel Kearns and Daniel Lafferty were impressive for the home side and both forced Tom Cervi into near post saves.

The scoreline was harsh on the home side, who had controlled much of the first half, but they were let down by some indiscipline at the back.

There was more bad news for the home side, and more importantly Derry City, as Gareth McGlynn was taken off on a stretcher in the first half.

Understandably, Celtic made 11 changes to the side that lost to Inter Milan yesterday, while Ger Doherty was the only Airtricity player to keep start both games.

Kearns had the first chance when he skipped inside Adam Matthews and forced Cervi to push a low shot around the post.

Celtic showed little attacking threat early on, but Hooper and Stokes did combine to create a shooting chance for Victor Wanyama, but his effort swerved wide.

On the half hour, Celtic were caught out by Doherty's long clearance and were lucky that Jason Byrne's finish did not match his first touch.

The Airtricity XI had enjoyed the better possession with Celtic coasting through the first half, yet the Bhoys went close to opening the scoring twice in a minute.

First, Owen Heary blocked Paddy McCourt's goalbound shot and, from the following corner, Doherty produced a flying save to keep out Stokes' strike.

Those near misses seemed to stir Celtic into life and Stokes ensured his side went in ahead at the break.

Daryl Murphy brushed past Ryan McBride and squared to Stokes whose shot took a slight nick off Price to beat Doherty.

The home side were almost level soon after the restart after as Kearns and Lafferty cut through Celtic on the left.

Cervi saved Lafferty's initial shot and captain Daniel Majstorovic was there to block Kearns' attempt from the rebound.

The game lost any of the fluency it had as the teams emptied their benches in the second half.

A bizarre handball from Danny Ventre gave Celtic the chance to double their advantage. Daryl Murphy easily beat his namesake and substitute keeper Barry Murphy from the spot.

The crowd acknowledged Kearns' efforts with an ovation when he was replaced by another young prospect James McClean.

The home side took risks in the final ten minutes and the finishing of Hooper and Stokes cruelly punished them. 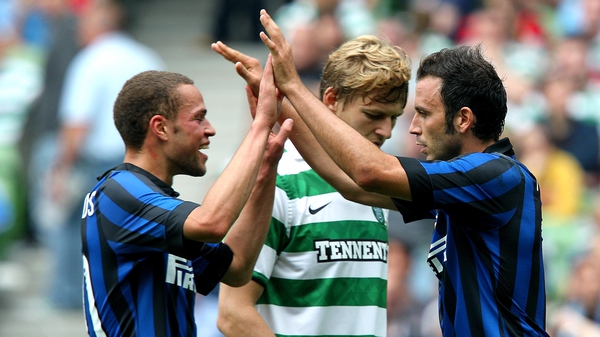