Two goals from Robbie Keane helped the Republic of Ireland to a 5-0 victory over Northern Ireland in the Carling Nations Cup.

Read how it happened with our minute-by-minute tracker.

Keane's substitution after the hour mark denied him a hat-trick and the chance to equal Bobby Charlton's international record of 49 goals in 106 games.

There were also goals for debutants Stephen Ward and Simon Cox, as well as own goal from Craig Cathcart, as the home side crushed their inexperienced neighbours at the Aviva Stadium.

Ward opened the scoring and his international account from close-range, before Keane punished a poor back pass from Lee Hodson to double the lead. The own goal from Cathcart stretched the home side's advantage at the break.

Keane grabbed his second from the penalty spot following a foul by Adam Thompson that saw the young defender sent-off. Simon Cox completed the rout with a fine debut goal of his own ten minutes from time.

Neither side were at full strength with Giovanni Trapattoni handing full international debuts to Ward and Cox.

David Forde picked up his first cap as a second half substitute for the untested Shay Given, who was keen to sharpen his reactions on his return from injury.

Nigel Worthington named just the one debutant in Josh Carson, but three of his back four – Thompson, Hodson and Cathcart – had just six caps between them before tonight.

His side's inexperience showed as they faded from a promising start and their mistakes were emphatically punished.

The James McCarthy injury/no-show saga had threatened to dominate headlines, but the manner of this victory may knock that story off the back pages.

Just over 200 Northern Ireland fans made the trip south in protest at what they say are FAI attempts to poach their players. Still, they made their voices heard in a stadium that was less than a third full with just over 15,000 fans.

Apart from the booing of the national anthems at the start, this encounter lacked the tension and intensity of yesteryear. Although, maybe that's not such a bad thing.

It was a scrappy opening from Trapattoni's men, with niggling fouls and poor passing, particularly from Paul McShane.

The first chance came the North's way when Sammy Clingan's free was cleared to the edge of the box by Damien Delaney. The ball dropped nicely for Jonny Gorman whose shot flew past Given and the upright.

A couple of bustling runs from Keith Treacy seemed to wake the home side from their early torpor and he was involved as Cox teed up Keith Andrews for a shot that struck the upright.

Keane was one of a number Republic players looking for match sharpness. His rustiness showed early on when he failed to convert two openings created by Foley and Cox.

Treacy was the instigator as Ward deservedly put the home side in front after 24 minutes. Alan Blayney fumbled the winger's cross and Ward was in the right place to tap home.

The home side were gifted a second when Hodson's under-hit back pass failed to reach Blayney. The skipper's predatory instincts returned as he nipped in to coolly chip the keeper for his 47th international goal.

Northern Ireland were looking rattled and only a late block by Gorman stopped Seamus Coleman increasing the Republic's advantage.

However, the third goal was not long coming and it was more misery for Cathcart, who was relegated from the Premier League with Blackpool on Sunday.

Keane and Cox combined to allow Coleman fire low across goal. Blayney once again failed to deal with the cross and Cathcart bundled the ball into his own net.

It got worse much worse for the visitors and Cathcart ten minutes after the restart. The defender was dispossessed and Keane raced through.

However, Keane's run on goal was interrupted by Thompson, who watched from the sideline as Keane slotted home the penalty.

Blayney attempted to redeem himself with a flying save to deny Keane a hat-trick after McShane had raided down the right.

Keane looked a bit miffed when withdrawn by Trapattoni, but the manager has his mind on greater challenges, notably Macedonia away in Skopje on 4 June.

Cox completed the rout with ten minutes to go when he was allowed to dribble unchallenged across the box and fire low across Blayney.

Hunt almost added a sixth in the dying moments when his curling free-kick beat Blayney but came back off the post.

The Republic now face Scotland at the same venue on Sunday in a game that could well decide the competition's inaugural champions. 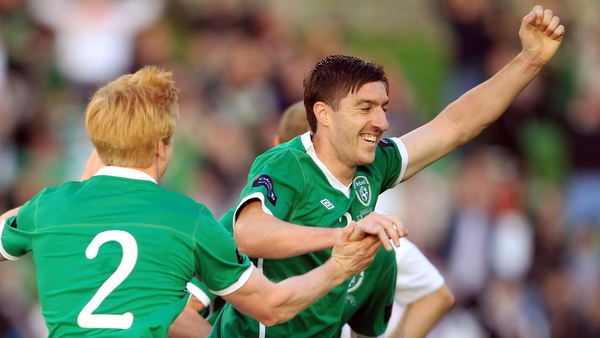