Republic of Ireland skipper Robbie Keane has warned pretenders to his throne that he has no intention of quitting international football just yet.

The 30-year-old will lead his country into Euro 2012 battle with Macedonia on Saturday wearing the armband for the 40th time, equalling Andy Townsend's record in the process.

He will do so admitting he does not know how long he will last at the Aviva Stadium having missed most of the last six weeks with a calf injury which has restricted him to around 20 minutes of senior football for West Ham and a little more than an hour for the reserves since the beginning of last month.

Keane caused something of a stir when, as he was unveiled by the Hammers following a January loan move from Tottenham, he admitted that he would happily move aside if a younger, fitter striker came through the ranks to take over his mantle in green shirt of Ireland.

However, he was quick to clarify his comments today as he prepared to win his 105th senior international cap.
Keane said: 'I will make it clear: I have no intention to retire at all. I want to play as long as I can.

'I think you have seen over years, I have always been committed and always wanted to play for my country, and that will never change.

'I don't like to predict what is going to happen in three or four years' time with injuries and what have you. I will just take each campaign as it comes, look forward to this campaign and hope we can qualify.

'I was just asked the question that if someone came in and the manager felt it was time for me to be pushed aside, I would be fairly happy.

'If someone young and fit came in and did a better job than me, I would be happy enough.'

Keane's presence in the squad represents a major boost for manager Giovanni Trapattoni, who has seen his resources stretched to the limit by injuries.

In attack, Leon Best has returned to Newcastle with an injury problem and Jon Walters will not be considered for tomorrow's game following the birth of his third child.

Keane arrived with a question mark hanging over his participation, but he is confident he is fit enough to play after returning to action a fortnight earlier than expected with the help of ice chamber treatments which proved more eventful than he might have thought.

Keane said: 'It's an ice chamber that myself and one of the lads went to, and Frank Bruno was there as well.

'He was in there singing Danny Boy, which was a bit bizarre. You do two sessions a day of nine minutes. You go in for four minutes, come back out, go on the bike for a few minutes and go back in again.

'You don't want to be in any longer than that, trust me. But it was good, it's probably healed me a lot better.' 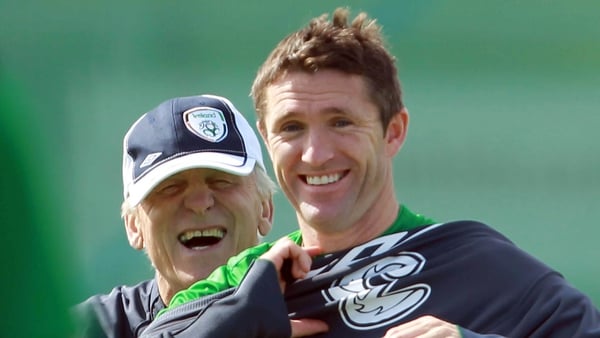