Goalkeeper Ciaran Kelly was the hero for Sligo Rovers as they claimed the FAI Ford Cup with a penalty shootout victory over Shamrock Rovers at the Aviva Stadium.

Eoin Doyle and Gary McCabe found the net in the shootout as the Bit O' Red added the Blue Riband of Irish football to their EA Sports Cup triumph earlier in the season.

Conor O'Grady and Alan Keane both missed penalties for Sligo but Kelly's heroics more than made up for that.

The largest cup final attendance in recent memory, 36,101, had seen Sligo dominate for long periods without making the breakthrough.

The Hoops raised their game in the second half, but had to hang for the last ten minutes of extra-time after Stephen Bradley was sent-off.

Sligo and Kelly had suffered heartbreak in losing the cup final to Sporting Fingal last year. Indeed, Kelly's foul on Eamon Zayed in the box gave Sporting a late chance to equalise, from where they went on to win.

The victory was Sligo third FAI Cup triumph and means that the Hoops long wait for a 25th cup victory goes on.

Michael O'Neill's side were second best for much of the afternoon, but they do have Champions League football to look forward to next season.

Shamrock Rovers' centre-half Aidan Price failed to recover fully from a hamstring injury, so Flynn started in the centre of defence and Stephen Rice moved to right-back.

Sligo were without the suspended Richie Ryan and Matthew Blinkhorn, so Paul Cook opted to play Doyle as the main striker supported by John Russell.

The game began with another refereeing mistake, as Tomás Connolly stopped play for foul on Sligo's Danny Ventre when Doyle was clean through.

Both Iarfhlaith Davoran and Twigg had shots that failed to find the target in the opening minutes, but thereafter it was almost all Sligo.

Cook's side settled quicker, even without their captain and playmaker Ryan, and showed the football that has won them many admirers this season.

They should have been in front after 17 minutes as Joseph Ndo's corner found Romauld Boco unmarked, but Alan Mannus touched Boco's header onto the bar.

Sligo, and Ndo in particular, controlled possession for long spells, but were often let down by their final ball and their decisions in the attacking third.

Shamrock Rovers were troubled by another Ndo corner kick just before half-time, but Gavin Peers could only glance his header wide.

It took the Hoops half an hour to get to the pace of the game, but the closest they came was a Billy Dennehy free-kick that sailed over Kelly's crossbar.

Bradley, who had been subdued in the opening half, had the chance to test Kelly just after the break but scuffed his shot wide.

In a lively opening to the second half, Twigg headed straight into Kelly's arms after a swift break by Thomas Stewart and James Chambers. At the other end, McCabe fired over following a counter-attack by Doyle and Boco.

Sligo turned up the pressure on Shamrock Rovers as Doyle shot over the bar from close range. Minutes later, Keane slipped Boco through, but he could only shoot straight at Mannus. The keeper's handling skills were tested again soon after by McCabe's low drive.

O'Neill made an attacking change to counter Sligo's dominance, with Dessie Baker coming on for Chambers.

Stewart, who had switched to left after Baker's introduction, skipped past Keane and forced Peers to clear from his line. Keane returned the favour, as he got in the way of Flynn's header from the resulting corner.

McCabe must have thought he had won the game when he went for goal with five minutes left, but Flynn threw his head in the way for a crucial block.

In a frantic finale, Kelly ensured the game went to extra-time as he pushed away Dennehy's shot and Twigg's header.

Both teams appeared jaded in extra-time following their exertions in the 90 minutes.

However, the momentum swung Sligo's way after Bradley picked up his second booking for a needless foul on Keane in the second half of extra-time.

There was then the strange sight of a substitute being substituted as Price came on for Baker to shore things up at the back.

Both Bradley and Baker's penalty-taking skills would be missed later on. Despite late Sligo pressure, the Hoops held on to take the game to the shootout.

However, this was to be Sligo and Kelly's day as they completed an impressive season with two trophies. 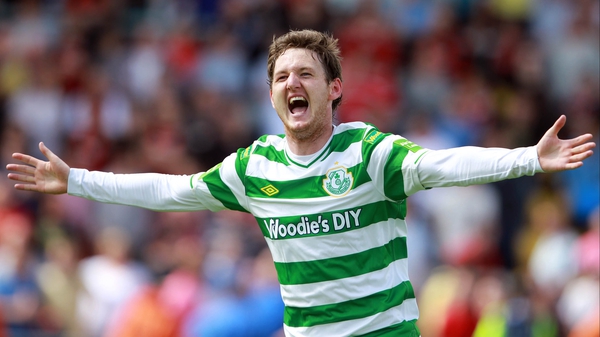