As it Happened: Republic of Ireland v Argentina

Argentina spoiled the party as international football returned to Lansdowne Road, with a controversial goal from Angel Di Maria giving the visitors a 1-0 win.

The winger lobbed Shay Given after 20 minutes at the new Aviva Stadium, but was he offside when Gonzalo Higuain flicked on Sergio Romero's goal-kick.

The visitors, under new coach Sergio Batista, dominated possession and restricted Ireland to half chances on a night of frustration for captain Robbie Keane, who was winning his 100th cap.

Despite the loss, there was still enough to please Giovanni Trapattoni as he recovers from stomach surgery in the Mater Hospital, notably an impressive debut from substitute Keith Treacy.

The Italian will not worry too much about losing momentum for the opening European Championship qualifiers if, as expected, he is fit enough to take his place on the bench.

All the pre-match talk had been about Keane, but Lionel Messi won out in the battle of the number 10s. The little Argentinean was afforded a standing ovation when he departed on the hour.

Following a rousing pre-match reception, Keane endured a tough night on the pitch, but could have made up for it if he had not uncharacteristically spurned a late chance.

The streets around Ballsbridge and Sandymount thronged with green before the game as international football turned to Dublin 4.

However, the stadium was far from full and the FAI will hope it will not take too long for the Lansdowne roar to return.

Messi was heavily involved, as Argentina virtually owned the ball in the opening half, with Irish players being dragged across the pitch.

With Marco Tardelli replacing Trapattoni in charge, Ireland worked hard but could not provide the guile to match the endeavour.

Messi gave the 45,200 fans a glimpse of his talents as early as the ninth minute when he skipped past John O'Shea, but his lob sailed over the bar.

His opposite number had his first shot in anger moments later, but could not find the target after Cillian Sheridan, who replaced Kevin Doyle, had out-jumped Javier Mascherano and Martin Demichelis.

Ireland were fortunate not to go behind in the 14th minute when Paul McShane was caught out by Mascherano's cross-field pass. Fortunately, the defender recovered to block Di Maria's cross.

But Ireland did not heed that warning and fell behind on 20 minutes, albeit in controversial circumstances with an offside in the build-up to the goal.

O'Shea went missing as Higuain flicked on Sergio Romero's goal-kick to Di Maria, who was standing in an offside position. The winger lifted the ball over a stranded Given as Ireland waited for a flag that never came.

Messi was drifting past his markers with ease. On the one occasion when he was felled by Richard Dunne, he was back on his feet within seconds testing Given with a curling shot.

Ireland improved after the restart and two quick touches from Keane took him past Demichelis on backline, but his cross evaded Fahey and Sheridan.

However, at the other end, Messi picked out substitute Diego Milito and Dunne and O'Shea scrambled to snuff out the danger.

The crowd welcomed on Andy Keogh and Greg Cunningham for the tiring Sheridan and Kevin Kilbane, but it was nothing compared to the standing ovation afforded Messi.

After more changes from both sides, Damien Duff drew a comfortable save from Romero following Keane's lay-off. The effort seemed to lift a crowd that had grown weary with Argentina's grip on possession.

Given was a spectator for much of the second half but got down to stop powerful drive from Fernando Gago.

The numerous substitutions broke up the pattern of the game, but Treacy's late cameo offers hope for the future.

He was straight into the action as he raced down the left wing, his cross found Andy Keogh at the front post, but the striker could only divert the ball over the bar.

Ireland pushed hard for an equaliser in a frantic final five minutes. The chance to cap a perfect night for Keane came and went when he missed an attempted overhead kick with the goal at his mercy. 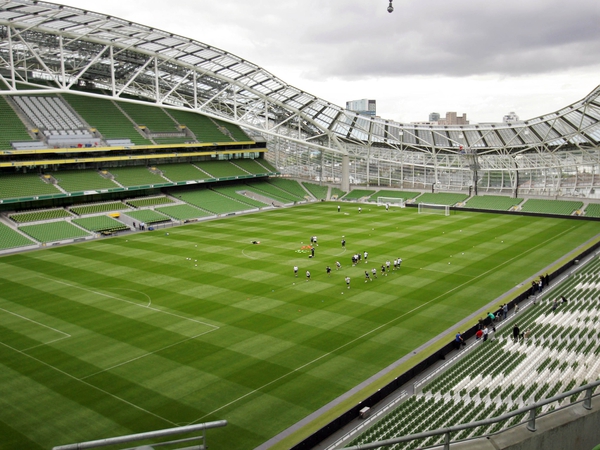