A new era of football on Lansdowne Road began with a 7-1 rout for Manchester United over an Airtricity League selection at the Aviva Stadium.

The home side worked hard but were totally outclassed in front of 49,861 fans. Dave Mulcahy got the biggest cheer of the night when he smashed in a consolation goal with 12 minutes left.

Damien Richardson had spoken before the game of this being a chance for the home players to make a name for themselves, but for many it was a humbling experience.

Richardson opted for experience and familiarity for the home side. Six Bohemians players were in the starting XI, including defenders Brian Shelly, Conor Powell and Ken Oman. Gavin Peers from Sligo Rovers was the odd man out at the back.

Michael Owen and Wayne Rooney both returned to the starting line-up with Owen playing for the first time since injuring his hamstring in the Carling Cup final.

United dispelled any suggestions that they would be taking this game lightly by dominating from the opening minute. It took just five minutes for the 'United, United' shouts to be heard from the large 'away' support.

It was a nervy display from the Airtricity League selection and those nerves contributed to the two opening goals. Paddy Madden battled gamely up front on his own, but was frequently out-muscled by Chris Smalling and Nemanja Vidic.

Tomasz Kuszczak enjoyed a quiet night, with the first half highlights for the home side coming in the form of Ryan Guy's spectacular somersault throw-in and Joseph Ndo's nutmeg on Darron Gibson late in the half.

The gulf in class was encapsulated by the battle between Conor Powell and Antonio Valencia. Powell is rightly regarded as one of best full-backs in the Airtricity League but he was given a torrid time by the winger.

Rooney was keen to get himself back in Alex Ferguson's good books after he was caught on the razzle last week in Manchester. The England striker impressed in dropping deep to pick up the ball but showed a little rustiness in front of goal.

Rooney and Owen linked up in the fourth minute but Oman covered the danger. Park was next to go close but Rogers kept out his close-range header at the second attempt.

Rooney should have doubled lead when he shifted away from Shelly after good work by Carrick and Park, but he dragged his shot wide.

For all their good play, United took the lead in fortuitous circumstances and it is a goal that Peers will not want to see again. The centre-half hesitated with his clearance and Park's block down gave Rogers no chance.

Rooney was guilty of wasting another chance on 20 minutes as Rogers' save from Darron Gibson rebounded into his path. Owen showed him how it should be done in doubling the lead with a clever flick over Rogers, despite close attention of Shelly and Peers.

Both sides made changes at half-time with Alan Kirby on for Killian Brennan but United's replacements made the most impact.

Hernandez came on for Rooney and wasted little time in getting on the scoresheet by drilling home Valencia's low cross 90 seconds after the restart. Berbatov replaced Owen and just missed out on adding a fourth when his header landed on top of the goal.

Valencia was rewarded for his man-of-the match performance by knocking home the fourth on the hour mark. Minutes later, Park curled home a fifth and his second of the night.

Both sides emptied the benches with the result now beyond any doubt and Evans headed in number six on 70 minutes.

Mulcahy was a late call-up to the squad in place of the injured Stephen O'Donnell and he took his chance to put this name in the record books with 12 minutes left.

Nani completed the scoring from the penalty spot after Hernandez had been fouled by Oman. There was still time for Valencia to hit the cross bar and Ben Amos to save twice from substitute Karl Sheppard. 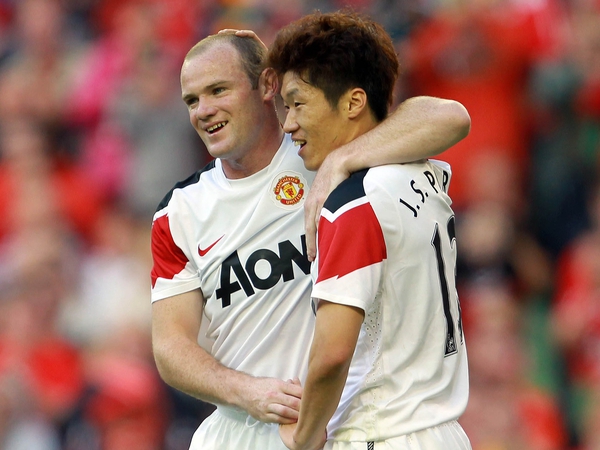