St Patrick’s Athletic put up a brave fight but bow out of the Europa League 5-1 on aggregate after an entertaining second leg at the RDS, writes Mark Cummins.

Gareth O’Connor put St Pat’s ahead on 49 minutes having been teed up by Declan O’Brien and a dramatic comeback looked on the cards.

However, it all fell apart on 80 minutes when Ryan Guy’s back pass was intercepted by Banel Nicolita who crashed his shot into the top right corner of the net.

Romeo Surdu then passed to Razvan Ochirosii inside the box for the winner on 89.

Needing goals, the Saints attacked from the off and forced a corner on three minutes.

Alan Cawley delivered it but Robinson Zapata in the Steaua goal made a good save.

Bogdan Stancu was causing early problems for Pat’s down the middle but Dave Partridge did well to dispossess him in a threatening position on seven minutes.

Two minutes after that János Székely picked out Pawel Golanski who found Rafal Grzelak but he headed over.

In the 12th minute, Enda Stevens crossed from the left for Guy but Zapata got to the ball first for another good save.

It was end to end stuff with Stancu shooting wide of Rogers’ right post on 16 minutes, while Zapata saved well yet again from O’Brien on 18 and 24 minutes.

On 27 Székely latched on to a ball from the left but fired high over the bar.

Pat’s should have been in front on 37 when Mark Quigley put Guy clean through on goal but the American sent his shot wide of Zapata’s left hand post.

Székely then fired over the bar on 40 minutes following a sustained Steaua attack.

Pat’s started the second half in excellent form and took the lead on 49 minutes when sloppy Steaua defending allowed O’Brien snatch the ball and square for O’Connor to shoot into the Anglesea Road end goal.

Cawley then crashed a free kick off the woodwork on 54 minutes while the Pat’s defensive well stood firm for a free from Golanski on the hour.

Pat’s were playing well and looked like they might do something special but it all fell apart on 80 minutes when Guy’s ball was intercepted by Nicolita who made no mistake with his shot.

Surdu then passed to Razvan Ochirosii who sealed the win on the night with his tap in on 89 minutes. 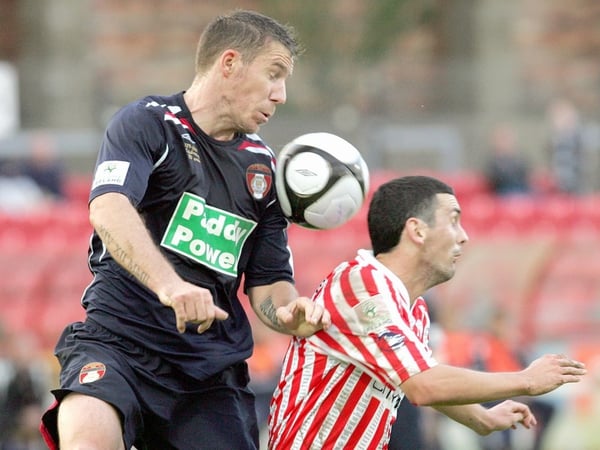