Having bemoaned the fact his side's home form has been adversely affected by playing so many times on a Sunday evening for the benefit of television, John McDonnell will scarcely have been charmed by this sluggish display.

But it's a time of the season when results outweigh performances and the St Pat's manager will delight in the three points, courtesy of Damien Lynch, his captain on the night, scoring a dramatic late goal.

Looking set to drop two valuable points in their pursuit of Bohemians, a St Patrick's side far from their best struck for a nonetheless deserved winner two minutes into stoppage time.
Sligo goalkeeper Richard Brush spilled a Keith Fahey drive and Lynch reacted quickest to stab the loose ball home at the foot of a post.

The win was only St Pat's' second in five league games and reduces Bohemians' lead to seven points. However, Pat Fenlon's Gypsies can regain their ten point lead should they beat Drogheda United in their re-arranged match at Dalymount Park tomorrow night.

The home side made five changes from the side that won in the FAI Cup at Wexford last week - including striker Gary O'Neill making his first start in two months.

The Dubliners started lethargically against a Sligo side that admirably very much came to play. Such was Sligo’s attacking and aggressive approach that St Patr's scarcely got out of their own half in the opening 15 minutes.

With their confidence running high during that period, Sligo got forward with aplomb. Rafael Cretaro was operating in behind front runner Romuald Boco and fired wide after seven minutes following a swift counter attack; while Chris Butler shot over the crossbar off his strong left-foot from almost 40 yards.

With not a little vocal scolding from McDonnell in the dugout St Pat's settled somewhat and Fahey brought a comfortable save from Brush. Soon after, Sligo defender Gavin Peers did well to block a fiercely struck Gary Dempsey drive that was on target.

But McDonnell had to remain animated as Sligo continued to be the more composed side.

Mark Quigley pepped up the home crowd for the first time with a weaving run past two defenders on 34 minutes, but the finish saw Brush comfortably gather his undemanding shot.

The Sligo 'keeper had a little more to do within three minutes though; Brush dived full stretch to his right to hold Dempsey's crisp header after Jason Gavin got to the end-line to cross.

Having started with five in midfield Sligo brought on Steve Feeney within minutes of the resumption; doubtless feeling that having got the measure of the home side they could go on and win the game.

With their playmaker Fahey surprisingly quiet St Pat's continued to struggle to break Sligo down.

Quigley headed wide from O'Neill's cross on the hour, while Fahey scuffed a shot straight at Brush a minute later as the hosts continued to struggle to find a spark.

When they did, Sligo's defending was resolute. The defence was epitomised by a terrific challenge by captain Conor O'Grady on Fahey 15 minutes from time before they snatched it right at the death. 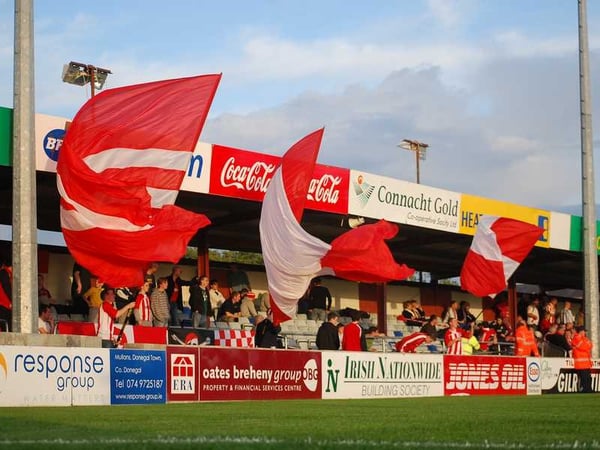