Bohemians' preparations for Sunday's InterToto Cup tie with FK Riga did not go according to plan at the Brandywell.

Indeed, Pat Fenlon must be fuming as he lost the services of two influential defenders in this League Cup quarter-final with both skipper, Owen Heary and centre-half, Ken Oman limping off injured in the first half.

Add in the fact that the Gypsies were comprehensively defeated and the Dubliners will have a lot to think about when flying out to the Baltic State this Thursday.

But take nothing away from Derry who bounced back after Friday night's disastrous defeat by St Patrick's Athletic at this venue.

And it was clear that Stephen Kenny certainly got a response from his players having made six changes from the side which started against the Saints.

Enthusiastic and anxious to make an impression, the League Cup holders took the game by the scruff of the neck to net twice during the final four minutes of the first half.

In fact, the deadlock was broken from an unlikely source when 16-year-old debutante, James McLean, bundled the ball home in the 41st minute from close range after Gareth McGlynn had proved the cross.

And on the stroke of half-time, Derry doubled their lead when Conor Sammon headed Kevin McHugh’s inviting cross solidly home.

Bohemians' striker, Jason Byrne, was introduced for the start of the second half, but Derry continued their onslaught to make it 3-0 in the 56th minute and secure their place in the semi-finals.

Another deep cross by the lively McGlynn saw Sammon pounce at the back post, his half volley crashing into the roof of the net from 10 yards and Bohemians were in serious trouble.

However, with 20 minutes remaining the Gypsies reduced the deficit when Byrne’s deep cross saw the unmarked John-Paul Kelly ghost in at the back post to head firmly home past Gerard Doherty.

But Derry were not finished just yet and they added a fourth goal in the 77th minute.

Ciaran Martyn played in McHugh and the striker drilled the ball home beyond the reach of Bohemians keeper, Chris Konopka. 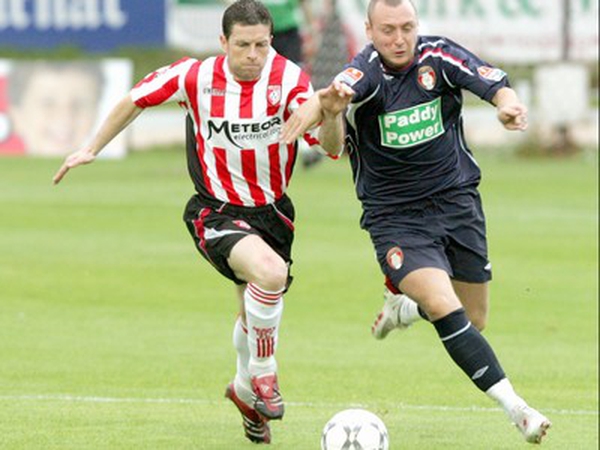