Barcelona have admitted wanting to offload Ronaldinho in the summer, and forward Samuel Eto'o may follow the Brazilian out the Nou Camp door.

Speaking on Catalan TV show Gol a Gol, club president Joan Laporta claimed the club were set to embark on ‘a new cycle’ with the arrival of new coach Josep Guardiola, and said certain players would have to leave to make that possible.

Ronaldinho, 28, has been rumoured to be heading for the exit after a torrid season in which he has played just 11 games and has had questions asked about his lifestyle.

He last played in the 2-1 defeat at home to Villarreal on March 9 and has since been ruled out with a thigh injury.

The playmaker has long been reported to be set for a move to either AC Milan or Internazionale but a price tag of 40 million euros may be a stumbling block.

However, Laporta insists Ronaldinho will leave and should do so ‘with his head held high’.

‘Ronaldinho needs new challenges and it's normal that when a cycle ends the most emblematic people from that cycle leave,’ he said.

‘I'd like him to go like (outgoing coach) Frank (Rijkaard), with his head held high, because he has given us so many glorious moments.’

Ronaldinho was linked with a move at the end of last season after the club failed to retain their Primera Liga and Champions League titles but Laporta revealed the Brazilian asked to stay and prove himself.

‘Maybe (last year) was the best time (for him to leave), but due to his conviction that he could get back to being number one and the club's gratitude to him, we gave him another opportunity,’ said Laporta.

Cameroon forward Eto'o was also close to leaving the Nou Camp last summer and may have now played his last game for Barca.

‘Eto'o is a player who is loyal to the club colours, who gives so much and who makes you love him,’ Laporta said.

‘He has also been one of the most emblematic players of this cycle and if he has to go then he deserves to do so with his head held high too, and with honour.’

One player Laporta did not link with an exit was former Arsenal forward Thierry Henry.

The Frenchman has had a difficult first season in Catalonia because of injury and personal problems and was also touted for a summer return to England.

However, Laporta defended the 30-year-old's record since his arrival.

‘Henry has scored 19 goals and has had to contend with some unexpected circumstances,’ he said.

‘He didn't come here to go straight into the first team. We already had Eto'o, Messi and Ronaldinho, but injuries changed everything.’ 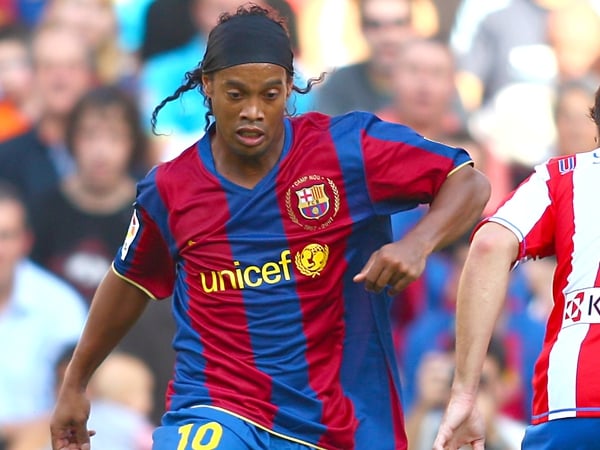