It took extra-time and 14 penalties before Sligo Rovers and Waterford United were finally separated after a thrilling Ford FAI Cup contest in front of a packed crowd at the Showgrounds.

The Blues took the lead after just eight minutes when Paul McCarthy capitalised on Karl Bermingham’s industry down the right and fired to the net from close range.

Adam Hughes went close for the home side with a sharp volley before this, but Rovers had just nine minutes to wait for the equaliser.

Matthew Judge was fouled on the left-hand side at the edge of the area, and his strike partner Fahrudin Kuduzovic stepped up to rifle the ball to the net past the helpless Delaney.

Rovers should have went in leading at the break, as midfielder Conor O’Grady – back from suspension – twice went close with headers.

But the closest they came was from centre-back Gavin Peers, who smacked an effort off the crossbar after Judge had teed him up.

Waterford gave notice of their intentions to attack when another striker, Dave Warren, was introduced at the break to join Vinny O’Sullivan and Bermingham up front.

But it was Rovers that had the perfect start to the second-half, with Judge shooting home from close range after O’Grady caused problems in the box from Kuduzovic’s corner.

And Rovers twice went close to adding a third before the hour-mark. Hughes went closest, heading narrowly wide after some superb crossfield play from Mark Boyd and Kuduzovic.

Cretaro also missed the target with a stinging effort from the edge of the area soon after. Waterford’s Daryl Kavanagh tested Richard Brush at the other end, but the netminder was equal to his long-range shot.

Cretaro really should have hit the target after being released into the area by Judge’s perfect pass soon after, and Rovers were made to pay when Waterford pulled level on 67 minutes.

Patrick Flynn’s cross from the right was controlled by Sullivan in the box and he turned and skilfully shot inside the far post.

Rovers were lucky not to concede another on 82 minutes when firstly Dave Breen and then McCarthy went close from Waterford corners.

Both sides had chances to win it before the full-time whistle, but neither found away through. The intensity continued into extra-time with Judge and McCarthy both going close in the opening minutes.

Robert Brosnan also stopped Adam Hughes’s shot on the line at the start of the second period, while Kuduzovic missed the target after O’Grady and Brian Cash combined in midfield before picking him out in the area.

Robbie Hedderman then hit the post at the other end after latching onto McCarthy’s free-kick.

But Hedderman proved the hero, firing his spot-kick home after Kuduzovic, Daniel Ventre, Stephen Manson and Cash had all missed for the home side. 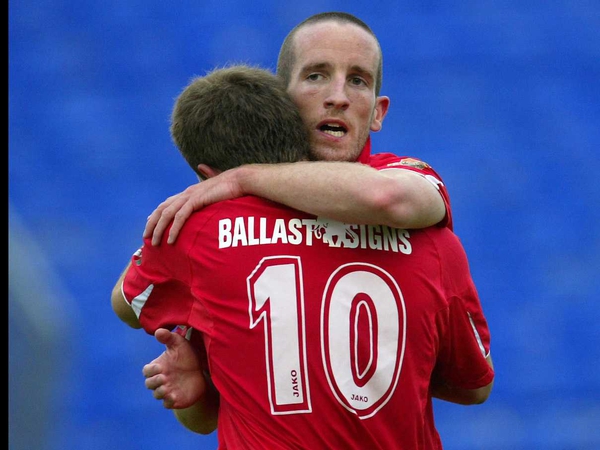