In the oppressive heat of the Stadio Olimpico, the Drogs enjoyed 90% of first-half possession, urged on by around 300 travelling fans in the 1,000-strong attendance.

Paul Doolin’s men started like a side determined to make an early breakthrough, and after barely a minute a lung-busting run by Brian Shelley set up a chance for Aidan O’Keeffe whose low shot was stopped by home keeper Michele Ceccoli.

The best move of the first quarter involved the brilliant Shelley, who shrugged off two tackles before crossing for Sami Ristila, whose close-range shot was superbly blocked by Ceccoli.

Luck deserted the Drogs on the half-hour when Ristila put through Robinson who was clearly upended by Ceccoli. However, the Albanian referee played advantage and Ristila was unable to force the rebound over the line. And when Stuart Byrne’s shot grazed the crossbar in the 40th minute, it seemed that Libertas would hold out until the interval.

But Drogheda kept pushing and when Steven Gray delivered a superb low cross from the left, Zayed shot past Ceccoli at the second attempt to put Drogheda ahead.

The second goal just wouldn’t come for the Boynesiders and the Sammarinese amateurs took full advantage in the 77th minute when Federico Santini cut open the Drogs defence with a pass for Federico Nanni who shot past a stunned Dan Connor.

Drogheda showed more sense of urgency in the closing stages and substitute Richie Baker had the ball in the net, only to have the effort ruled out for offside.

But they lacked the creative play required to break open a determined home defence and SP Libertas – playing their first match in Europe – held out for a famous result against the eircom League leaders. 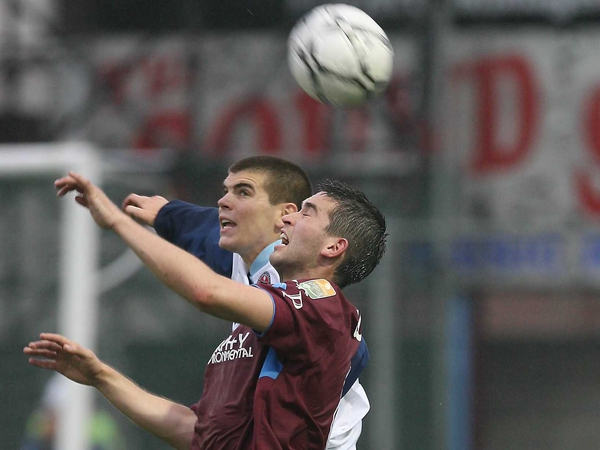