Dirk Kuyt put Liverpool into their second Champions League final inside three years by scoring the winning penalty against Chelsea at Anfield.

With the scores level on aggregate at 1-1 after extra-time, Bolo Zenden, Xabi Alonso, Steven Gerrard and Dirk Kuyt all scored from the spot while Arjen Robben and Geremi saw their efforts saved by Jose Reina.

Anfield was the expected cauldron of anticipation and it was no surprise when Liverpool enjoyed the first effort on goal in the fifth minute when captain Gerrard let fly from 25 yards.

However, the England midfielder failed to trouble Petr Cech as his shot drifted past an upright.

Liverpool were clearly intent on levelling the aggregate scores as quickly as possible but while they began to stretch Chelsea's defence, their final ball left a lot to be desired.

In the tenth minute John Arne Riise delivered a superb cross from the left wing only for it fly harmlessly across the face of the Chelsea six-yard box.

In the 14th minute Frank Lampard set Didier Drogba clear of the home defence but the Ivorian's attempted cross to Salomon Kalou was easily dealt with by Agger.

Chelsea were beginning to live dangerously and both Mikel John Obi and Joe Cole were lucky to escape without a booking for fouls on Zenden and Gerrard.

The champions paid dearly for Cole's misdemeanour in the 22nd minute when Agger swept home Gerrard's free-kick to give the home side the lead on the night and put them level overall.

The second half began with Liverpool attempting to put more pressure on the visitors but Dirk Kuyt was unceremoniously dumped on the floor by Paulo Ferreira when he tried to make progress down the left.

Moments later Gerrard found his way blocked by Ashley Cole as he attempted to work his way into the penalty area.

Chelsea had resisted the temptation to make any changes in the interval and were beginning to enjoy more possession.

Joe Cole just overran the ball when he tried to take on the Liverpool defence and Reina went down to collect before the England international could move into a shooting position.

In the 54th minute Chelsea won a free-kick on the right wing but Lampard's punt into the area sailed over everyone.

In the 56th minute Chelsea had Cech to thank when he pulled off a superb save at the far post.

Pennant turned Claude Makelele inside out before crossing to the far post where England striker Peter Crouch's downward header was saved by Cech's legs.

Moments later Kuyt hit the crossbar with a powerful header as Liverpool increased the pressure on the Londoners.

In the 61st minute Agger was booked for one foul too many on Drogba, who was left writhing on the deck after a challenge from behind.

A goal for Chelsea would give Liverpool a mountain to climb but the champions were more content to knock the ball around than to try and hurt Liverpool.

But a poor pass from Makelele left Essien with no choice but to foul Crouch and give Liverpool another opportunity in the 69th minute.

Once again Crouch was the target and his header was cleared for a corner by the grateful Essien.

When Pennant swung the ball into the middle it was Drogba who found the height to clear the danger.

In the 75th minute Chelsea should have equalised when Ashley Cole got clear on the left flank and crossed into the six-yard box where Drogba somehow managed to send the ball over the crossbar.

With the aggregate scores locked at 1-1, the match went into extra-time.

In the 97th minute Mourinho made his first change of the night when he replaced Joe Cole with Dutch winger Arjen Robben.

Three minutes later Kuyt was adjudged offside when he converted the rebound after Cech had failed to hold a ferocious drive from Xabi Alonso.

Five minutes before the end of extra-time Drogba just failed to connect with a low cross from Shaun Wright-Phillips but Cech rescued Chelsea when he punched away Kuyt's shot moments later.

And the game went to penalties with Liverpool keeper Reina the hero as he saved two penalties. 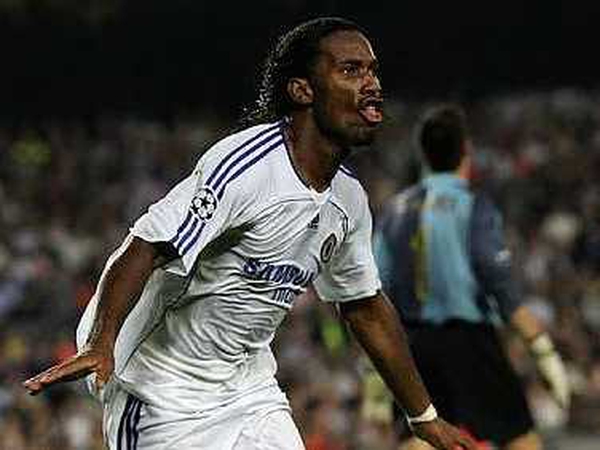