Watch Republic of Ireland v Wales live from Croke Park on Saturday, 24 March, on RTÉ Two and rte.ie/sport (RoI only) from 2pm. Commentary will be live on RTÉ Radio 1

Kevin Doyle is hoping Ireland's footballers can follow the lead of the country's rugby players and cricketers.

The Republic face Wales tomorrow in a Euro 2008 qualifier knowing they have yet to win over the Irish fans in this current campaign.

A humiliating hammering in Cyprus last October followed by further embarrassment against San Marino just over six weeks ago have led to a torrent of criticism.

In contrast, Ireland's rugby stars came within four points of the RBS 6 Nations title, while the cricketers are currently conjuring up miracles in the Caribbean.

It is now incumbent on Steve Staunton's side to keep the national fervour flowing, with Reading striker Doyle conceding: 'We [the footballers] have to do something.

'The rugby players won the Triple Crown, and were so unlucky in just missing out on the Six Nations title, while the cricketers are winning too.

'They say things come in threes, so hopefully we can get a win at Croke Park. It won't be easy, but that's our aim.'

Emotions will certainly be running high as the Republic play on a ground that has been the stronghold of the GAA for decades.

Doyle, who visited Croke Park to watch Wexford compete in hurling, knows the significance of the venue, and how vital it will be for he and his team-mates to stay focused.

'It will be a dream come true to play on a pitch no soccer player would have expected to play on not so long ago,' added Doyle.

'We've now been looking forward to this for a year, and after the rugby players had their chance, it's the turn of the soccer lads.

'I know the atmosphere is going to be great - it was for the rugby games.

'I saw them singing the national anthem, and they all appeared to be pretty emotional.

'But we will just have to try and put it out of our minds, not let it get to us and treat it as another game.

'I'm sure the first five to 10 minutes it will be a bit hairy, but after that we should settle down and be fine."

After breaking his duck for Ireland in last November's 5-0 victory over San Marino at Lansdowne Road, Doyle would now love to become the first player to score at Croke Park.

'It would be brilliant - who wouldn't want to do that?" he added.

'There'll be a few of us looking to do it. But to score any goal there, not just the first, would be a bit special.

'Hopefully I'll get one quickly. It won't be something that'll take an age to come.

'But for whoever does do it, it will be something they'll be able to talk about for a long time.' 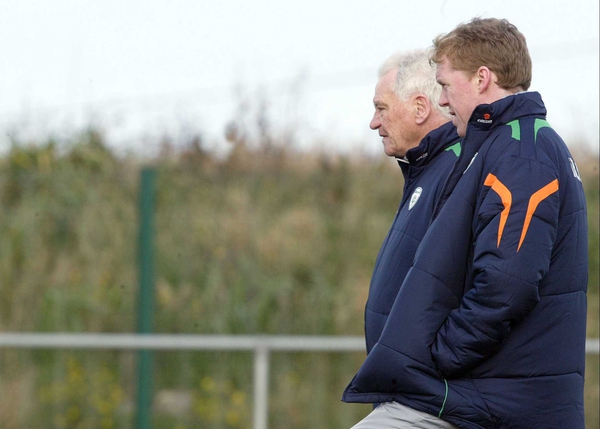