Stephen Ireland spared the blushes of Republic of Ireland manager Steve Staunton with a last-gasp strike that secured a 2-1 win against San Marino - but his job is again on the line.

But just eight seconds from the end of the four minutes of stoppage time, Manchester City midfielder Ireland tapped home a simple chance from inside the six-yard box.

That did not stop the unhappy Ireland supporters calling for the head of Football Association of Ireland chief executive John Delaney.

The pressure on Staunton is also certain to mount, even though his side still have an outside chance of qualifying for next summer's finals in Austria and Switzerland.

It remains to be seen whether both he and Delaney can survive this latest miserable result, coming so soon on the back of the debacle in Cyprus in October when they were hammered 5-2.

Ireland may have dominated throughout, but the football they served up was distinctly average.

There was only one moment of encouraging quality in the opening half from a starting line-up that boasted nine Premiership stars, and that a defence-splitting ball from Ireland into Robbie Keane.

Captain Keane should have buried the 15th-minute opportunity, so setting the ball rolling on what was expected to be another comfortable victory after their 5-0 win at Lansdowne Road in November.

But instead he took the chance far too early and drilled his shot narrowly wide of the post, so ensuring another uncomfortable night for Staunton.

By the break there were boos from the 2,500 visiting supporters, suggesting they are becoming increasingly disillusioned with the Staunton era.

If Staunton thought the fans were still with him after the nightmare in Nicosia last October, then he better think again after this latest woeful show.

Yes, Ireland created a glut of chances, but the fact they could not find the net as the game wore on in the opening half played into San Marino's hands as they grew in confidence.

San Marino goalkeeper Aldo Simoncini, who had conceded 13 goals to Germany in his last competitive outing in September, then made two good saves.

His first was in denying Ian Harte from a 25-yard free-kick. He then thwarted Duff as he rifled in an angled drive from 10 yards.

Following Keane's miss, Ireland then started to huff and puff as frustration started to bite and as San Marino tightened up at the back, winning headers and making blocks.

Theirs was a thin pale-blue line, but it did enough to keep the boys in green at bay for the remainder of the half as the chances dried up.

Sure, Keane drove another effort narrowly wide, Richard Dunne powered a header over the bar, while a Kevin Kilbane snap-shot fizzed past the left-hand post, but the Irish lacked a cutting edge.

At least there was a response after the interval, with the deadlock broken in the 49th minute following a fine right-wing ball from Steve Finnan.

Shane Long, making his debut managed to flick the ball on to the far post where Kilbane headed home his seventh goal for his country.

That should have been the cue for a glut of goals, but the famine failed to turn into a feast.

Duff did show his class in the 56th minute in a moment that should have led to a second goal.

The Newcastle winger brilliantly retrieved a Harte free-kick from wide on the left that cleared the heads of everyone in the area. With a burst of speed he surged past two defenders before driving a right-foot shot across the face of goal to the far post where Keane failed to connect from a yard out.

But again Ireland failed to build, and instead conceded in the 86th minute when Marini capitalised on a mix-up between half-time substitute Paul McShane and goalkeeper Wayne Henderson.

At that point San Marino stood on the brink of history as they had previously lost all 37 of their European Championship qualifying matches.

Instead, they were robbed thanks to Ireland, but as for Ireland as a footballing nation, and in particular Staunton and Delaney, they must again face the flak that will inevitably follow. 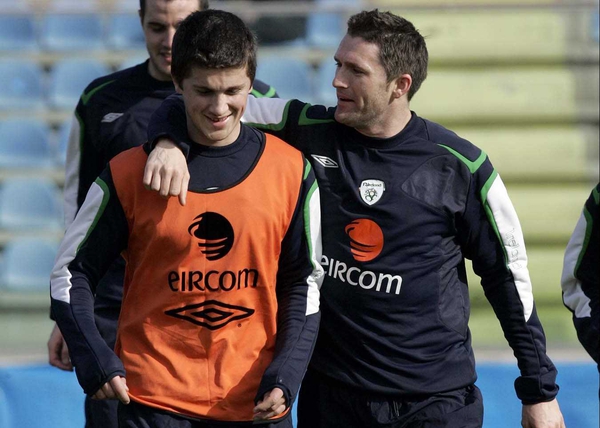