Stephen Kenny ended his tenure at the Brandywell on a winning note with a 1-0 victory over Cork City but, unfortunately for the Candystripes it was not enough to win the league title.

The Foylesiders therefore have secured qualification for the UEFA Cup for the second successive year with the FAI Cup final still to come on December 3 at Lansdowne Road.

Predictably, it proved a highly emotional evening for Kenny who was cheered off the pitch by 5,000 fans as he now turns his attentions to the Scottish Premier Division and his new appointment as manager of Dunfermline Athletic.

The Dubliner leaves Derry this morning to watch Dunfermline entertain Dundee United but he’s expected to return to Derry a week later to help the northern club prepare for their cup final against St. Pat's.

In what was a bridge too far, Derry played their part with Kenny opting to remain loyal to the team which secured 1-0 victories on their recent trips to St. Patrick's Athletic and Waterford.

And it was Derry who produced the first threat on goal in the 9th minute.

Ruaidhri Higgins floated a free-kick into the danger area and when Clive Delaney sent a looping header on target, the back-peddling Cork keeper, Michael Devine did particularly well to finger-tip the effort over his cross bar.

The home side continued to press and they were rewarded two minutes later.

As was the case in those two previous away games, Mark Farren burst to the fore when he netted the vital opening goal.

Barry Molloy played an incisive pass forward from inside his own half and when Farren’s electrifying pace saw him beat Devine to the loose ball, the striker coolly took his time by side-stepping a defender before drilling the ball low into the unguarded net.

Cork went close to restoring equality in the first minute of the second half following a Neale Fenn free but centre-half, Alan Bennett, flashed his volley over the crossbar at the back post.

With nerves evident in the Derry dugout, referee Dave McKeon was summoned by his fourth official, Paul Deering, which resulted in the sending-off of the home side’s feisty assistant manager, Paul Hegarty.

But the home side threatened again in the 67th minute when a deep cross by Killian Brennan saw Farren’s downward header fail to extend the alert Devine at his near post.

With all ears listening to the closing stages at Tolka Park, Kenny's final farewell was dampened by, in fairness, the Brandywell Faithful certainly acknowledged his leadership afterwards, remaining in place for 15 minutes after the final whistle. 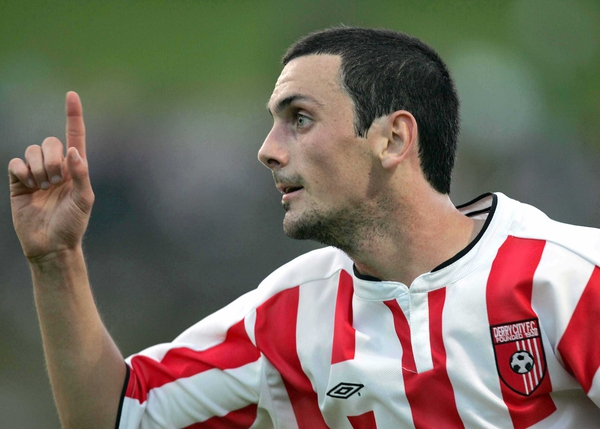