A late goal from substitute Luis Garcia settled a frantic Premiership encounter with Arsenal as the Spanish international came off the bench to give Liverpool a 1-0 victory.

This was only Liverpool's second win in 11 matches with the north-Londoners and left them 10 points ahead of the Gunners and right in behind-second placed Manchester United.

Robbie Fowler, 10 goals in his previous 16 Premier League games against the Gunners, got his second start in four days, and managed a long-range header wide in Liverpool's opening attacks.

But Arsenal went closer when Toure rose to head just wide from a Cesc Fabregas corner, before Jens Lehmann scooped a cross from Fowler's toes. A crisper, quicker Liverpool move ended with Harry Kewell cracking a first-time drive into the side netting.

But this crucial game, with Champions League qualification coming into the equation, had seen a tentative start to a match steeped in history as it fell on the 10th anniversary of the death of Bob Paisley.

Liverpool had plenty of the ball and territorial dominance, but a clear-cut opening failed to materialise. Liverpool's next attack was a sweeping passing move that ended with John Arne Riise curling a low 20-yard shot just wide of Lehmann's left-hand post.

Lehmann then had to make a fine tip over when Philippe Senderos deflected a cross seemingly over the 'keeper, but the German made an outstanding intervention.

Fernando Morientes summed up his current form by scuffing a 10-yard shot before, on 31 minutes, Liverpool wasted a glorious chance to take control. Morientes was nudged off the ball by Eboue as he went for a Kewell chip, and referee Graham Poll pointed to the spot. Up stepped Steven Gerrard for the penalty, but Lehmann flung himself to his right to turn away the right-footed effort.

The second period saw little change in the balance of play and possession, with Liverpool still searching for the genuine openings. Lehmann saved a Kewell effort at the foot of a post before the first real flash of the old Fowler almost put Liverpool ahead on 51 minutes.

He took Gerrard's driven angled cross in his stride, one touch away from a defender and then a firm shot across the face of the goal that Lehmann did well to paw away.

Arsenal responded with a Thierry Henry 20-yard shot that was parried away by Jerzy Dudek, their only on-target effort to this point.

Morientes rose well to flick a header inches wide from a Gerrard cross, as Liverpool's pressure increased, with Sami Hyypia seeing a shot blocked on the post by Senderos. Dietmar Hamann took over from Xabi Alonso on 71 minutes before Lehmann was again in action to turn away a Kewell overhead kick.

Liverpool had been on the offensive for almost all the half, but the lack of pace up front and in their midfield tempo gave Arsenal time to regroup and contain.

On 79 minutes Robert Pires was replaced by Alexander Hleb, and a minute later attempts to rectify Liverpool's lack of pace resulted in Djibril Cisse taking over from the willing Fowler. But Morientes' luck worsened when he failed to turn home a Gerrard cross on 84 minutes just a couple of yards out, and even Cisse's overhead flick could not rescue the situation.

Luis Garcia replaced Sissoko on 84 minutes and that produced the breakthrough. Dietmar Hamann's 30-yard shot on 87 minutes was palmed away by Lehmann, and the little Spaniard made up yards to get there first to force the ball home. 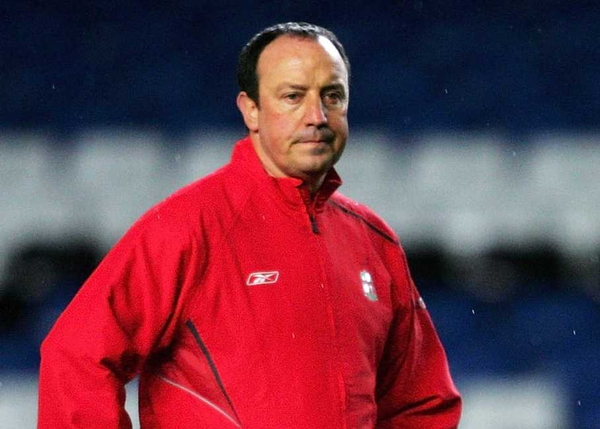