Shelbourne were easy 4-1 (6-2 on aggregate) winners tonight in Tolka Park as Glentoran's lack of fitness told and the eircom Premier Division champions advanced to a Champions League second-qualifying round clash with FC Steaua Bucharest.

Shels started the stronger, looking every bit the team that were well into their domestic season.

After only thirteen minutes Dave Crawley's free-kick found Owen Heary who rose with no Glentoran defenders around him to head past Elliot Morris.

The opener would inspire Glentoran's only real period of any sort of equality with Shelbourne, as they pressed for the much-needed away goal. It came on 20 minutes after a dreadful spell of Shelbourne defending as some crisp passing between Timothy McCann and Darren Lockhart resulted in McCann striking to the net.

However, normal programming was soon resumed. Ollie Cahill's whipped cross found Ollie Baker who rose to head into what looked like an empty net, only for Morris to spring from nowhere to claw it out of the net.

Shels wouldn't be denied, though, and on the half-hour mark Stuart Byrne's shot from the edge of the box ricocheted off Paul Leeman's hand. Leeman, who had already been booked earlier in the match, was sent to the line and Jason Byrne made no mistake with the spot-kick to make it 2-1 on the night, and 4-2 on aggregate.

From there the first-half became a procession, with Shelbourne making all the running and Glentoran already resorting to last-ditch defending as their lack of fitness began to tell.

The second-half provided only a brief respite for the Northerners and Shelbourne continued as they had begun.

Just before the hour mark, a Shelbourne cross from the right took a wicked deflection off a defender's head and fell for Glen Crowe who turned it brilliantly into the net past a static Morris.

Shels were being given acres of space by a tired Glentoran, and Heary was unchallenged on the right when his cross found Jason Byrne who headed a sweet ball to the net on the seventieth minute.

In the last twenty minutes, with Glentoran suffering and lacking in fitness, Shelbourne had the run of the pitch and rained shots down on Morris, who performed bravely.

Ultimately, however, the Dublin side were far stronger and advance to the next round where they should expect a much tougher time against Steaua Bucharest. 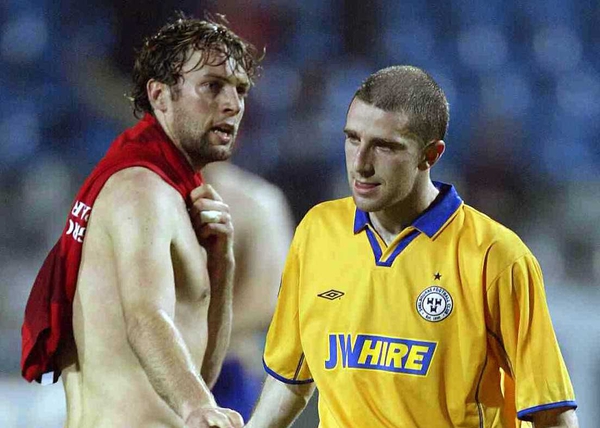 Shels to start as favourites