Italy missed out on the World Cup finals again after losing 1-0 at home to North Macedonia in their playoff semi-final as Aleksandar Trajkovski's last-gasp strike earned the visitors a famous win.

European champions Italy did not qualify for the World Cup four years ago, their first failure to reach soccer's global showpiece tournament since 1958, but they dominated from the off in Palermo and looked on course for victory.

The hosts became more desperate in their search for a winner after the break as chances continued to come and go before, in stoppage time, Trajkovski arrowed in a stunning winner to spark wild North Macedonian celebrations.

North Macedonia have scored in added-time 😱

Italy are on the brink of not reaching the World Cup 😳 pic.twitter.com/ty5GzandXP

Roberto Mancini's Italy side had 32 efforts at goal in the match, but somehow fell short, with North Macedonia going on to play Portugal in the playoff final next week for a place in the Qatar World Cup which will not involve Italy once more.

Without veteran pairing Leonardo Bonucci and Giorgio Chiellini through injury, Italy's makeshift defence was barely troubled in the first half, as all the action took place down the other end.

Domenico Berardi had the best of the openings having been presented with the ball after North Macedonia goalkeeper Stole Dimitrievski misplaced a pass, but the Sassuolo forward's shot was tame, with Dimitrievski getting back to make the save.

Ciro Immobile also wasted a glorious first-half chance for Italy when blazing over the bar from a good position.

Berardi was again guilty of profligacy after the break, shooting over when he should have hit the target.

As the match wore on, Italy nerves kicked in and their finishing became more erratic. Mancini shuffled his pack, giving Cagliari striker Joao Pedro his debut, but with their only meaningful attack of the match, North Macedonia seized their chance.

Italy did not look to be in too much danger, but Trajkovski, who plays in Saudi Arabia for Al-Fayha, had other ideas, writing his name into North Macedonian folklore with a shot that crept inside the post to stun the home fans.

North Macedonia's reward for their famous victory is a play-off final clash with Portgual.

The Portuguese claimed a 3-1 win over Turkey, whose striker Burak Yilmaz skied a penalty five minutes from full-time that would have drawn the sides level in their playoff semi-final.

Roared by a sold-out Dragao Stadium in Porto, Portugal dominated the game from the start and went 2-0 up in the first half after Otavio scored one goal and created another for Diogo Jota.

But Fernando Santos's side were pegged back by a Yilmaz goal in 65th minute that put the Portuguese fans on the edge of their seats as Turkey started to threaten.

Defender Jose Fonte then fouled Enes Unal inside the area in the 85th minute to concede a penalty that Yilmaz fired high over the bar.

Portugal substitute Matheus Nunes relieved the pressure on the hosts in added time with their third goal from a counter attack. 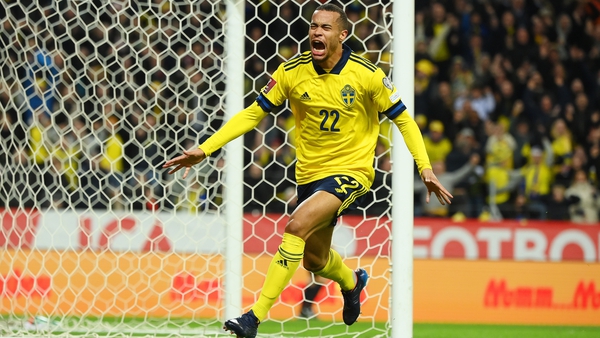