Kyle Lafferty believes Northern Ireland showed the future is bright even in defeat to the United States on Sunday.

Ian Baraclough took a number of players out of the firing line ahead of Wednesday's crucial World Cup qualifier against Bulgaria, instead handing vital experience to the likes of Conor Hazard, Dan Ballard, Ciaron Brown and Shayne Lavery.

A youthful side featuring 10 changes from last week's World Cup qualifying defeat to Italy was unlucky to come out on the losing end as the United States scored through Gio Reyna's deflected strike and a disputed Christian Pulisic penalty.

Niall McGinn scored a superb late consolation, but the main takeaway was the way in which Northern Ireland's next generation coped with an American side packed with players plying their trade in Europe's top leagues.

The 33-year-old Lafferty lent the hosts some experience as he was named captain on the occasion of his 81st cap, and was impressed by those around him even as their winless run continued.

"I'm proud," the Kilmarnock striker said. "We had a young team out, with some earning the first cap, or second and quite a few under 10 caps.

"There were only four or five players with 30 or 40 caps but I thought we caused them problems.

"We were right on them in the first half and we put pressure on the ball early doors and created chances.

"Take nothing away from the (United States). They are a young, athletic team but in the first half we outran them and won every single battle all over the pitch so I'm happy with the performance."

Lafferty was partnered in attack by Linfield's Shayne Lavery, and echoed his international manager Ian Baraclough when he said he believed the 22-year-old former Everton trainee will soon be plying his trade back across the Irish Sea.

"He's one of those players who is always in players' faces and he will get a chance," Lafferty said.

"He's done well for Linfield this season, and even last season. I'm sure he'll get a move across the water sooner rather than later." 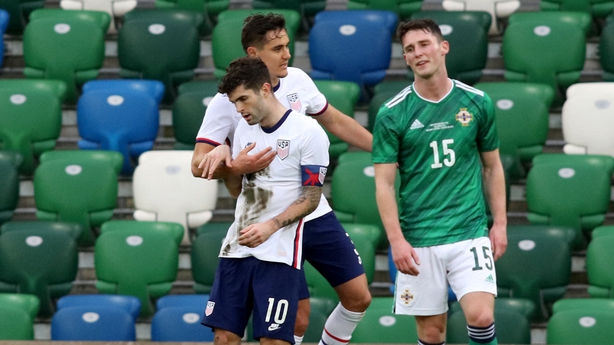 There was also a second-half debut for Accrington striker Dion Charles, who twice tested Manchester City goalkeeper Zack Steffen as he looked unfazed by the step up to international football.

Lafferty, without an international goal since November 2016, had early chances in the match but dragged the best of them wide after being played in by George Saville.

Northern Ireland's second-highest goalscorer is confident he can get on the scoresheet again soon having hit the ground running since his February move back to Scotland, but admitted he has dropped down the pecking order for now.

"Goals will get you games and as a striker that is what you're judged on," he said.

"Josh (Magennis) has stepped up to the plate many times now and I think he deserves that chance.

"If I'm putting in performances every week for my club and coming here and getting goals then I'll knock on the manager's door but right now Josh is scoring goals for his club and country and deserves that starting role.

"Until I start hitting the back of the net, I will have to settle for coming off the bench."