Colombia and Ecuador have both made last-minute replacements to their World Cup squads because of injuries players suffered in warm-up matches.

Segundo Castillo, a veteran midfielder who played for Ecuador at the 2006 World Cup in Germany, has failed to recover from a knee injury he suffered on 31 May.

Castillo sustained the injury in a tackle with Mexico's Luis Montes during a friendly in Arlington, Texas.

Montes broke his leg and was immediately withdrawn from Mexico's squad after their 3-1 win.

Ecuador, due to travel to Brazil on Tuesday, are drawn in Group E with Switzerland, Honduras and France.

Colombia midfielder Aldo Leao Ramirez took a knock during training last week, missing their 3-0 win in a friendly over Jordan in Buenos Aires on Friday.

He is being replaced by winger Carlos Carbonero, who helped River Plate win the Argentine league title last month. 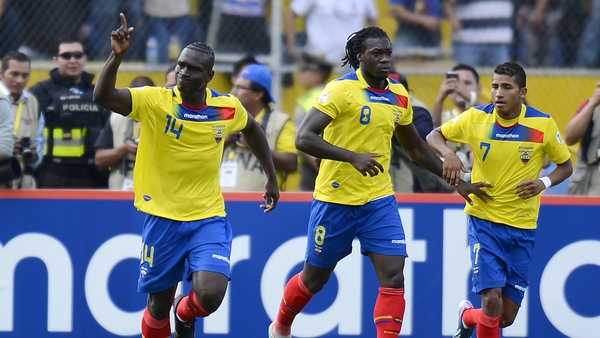