Alan Shearer believes Wayne Rooney can finish top scorer at the World Cup if he is given the right backing by England boss Roy Hodgson.

Shearer netted 30 times in 63 matches for England and won the Golden Boot at the 1996 Euros, where he scored five goals in five games to lead the hosts to the semi-finals.

Rooney’s place in the side had been questioned in the lead-up to the tournament after he had gone 12 matches and almost two years without a goal for his country.

Shearer has revealed how then-England manager Terry Venables helped him rediscover his form and insists Rooney can answer his critics in similar fashion.

"Three weeks before Euro 96, Terry said to me, 'whatever happens between now and the first game against Switzerland you're going to start,'" Shearer said.

"That just gave me great confidence that the manager had belief in me but he also said 'you'll start, but the rest is up to you'. I think Roy Hodgson will say the same to Rooney.

"I managed to get off to a good start, I scored in the first game and finished the tournament top-scorer - I've no doubt that Wayne can do the same."

Rooney's place in the England line-up is under scrutiny after an underwhelming display in Friday's friendly against Peru at Wembley.

The Manchester United striker scored seven goals during the qualification campaign, but he is yet to find the net at a World Cup finals after drawing blanks in both 2006 and 2010.

Shearer believes Rooney should start England's Group D opener against Italy but says he has to deliver to keep his place for the game against Uruguay.

"He's a big player, and he's proved that in the past" - Alan Shearer on Wayne Rooney

"He should start against Italy," Shearer said.

"But then it's whether he performs or not because we have got other players now who can produce moments of magic."

Shearer continued: "I don't think Wayne Rooney will want it on his record that he's been to three World Cups and not scored in any of them.

"He needs to score some goals and try to make England successful - I believe he can do it but it's up to him to go out and prove that."

Hodgson has lamented what he described as a national "obsession" with Rooney and said the striker only wants to be considered a "very important member of the squad."

Shearer believes Rooney can handle the extra attention but says he should be wary with the likes of Daniel Sturridge, Adam Lallana and Raheem Sterling all vying for the spotlight.

"I don't think people are obsessed with him - players can handle pressure, he's a big player, and he's proved that in the past," Shearer said.

"The pressure is on him like there is any other player. He's one of the biggest names in the world so everyone wants to talk about him."

England are hoping Rooney can form a potent partnership with Sturridge to fire the Three Lions into the latter stages of the tournament.

Sturridge, who scored 21 league goals for Liverpool this season, was on target against Peru with a sweet, long-range strike, but the duo showed few moments of mutual understanding.

"Time will tell if this one can come off, I think it can, I hope so because Sturridge is going to be the main centre forward and he can to go to this World Cup and score goals,” Shearer said.

"He now feels part of the set-up at Liverpool and England which in turn will give him confidence that he can do it at the very highest level like a World Cup." 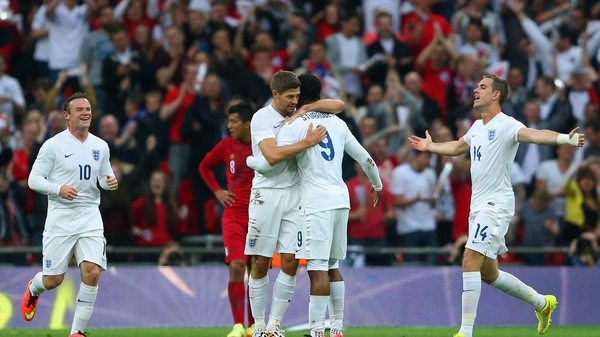