Mark Allen has set up a World Championship meeting with Ronnie O'Sullivan after a 10-6 win over Scotland’s Scott Donaldson at the Crucible.

In the other morning session, the Antrim man made two century breaks on his way to a 5-4 lead against his opponent, who compiled four half-centuries of his own.

Allen moved further ahead by taking the first two frames of the second session, the first of those including a break of 57, before Donaldson replied with two frames of his own to leave it 7-6.

The 14th frame always felt like a big one, and after a break of 52 helped Allen claim that one he added the final two to book what will be a highly-anticipated clash with the world number two.

Anthony McGill secured his sixth second-round appearance at the World Championship after seeing off the dogged challenge of Liam Highfield.

Scotland's McGill, a semi-finalist at the Crucible in 2020, was helped by a fluked red in the decisive frame to seal a 10-7 win against world number 43 Highfield at the end of a titanic first-round struggle.

Highfield, 31, from Stoke, trailed 6-3 overnight and won three of the first four frames on Monday to trail just 7-6 at the mid-session interval.

Glasgow's McGill, who knocked O'Sullivan out of last year's competition and has reached the last eight on two other occasions, then took the next two to open up a 9-6 lead.

Highfield, who lost in the first round in his previous two visits to the Crucible, was ultimately undone by poor positional play but edged another attritional frame to trail 9-7.

World number 13 McGill had to call on all his big-stage experience and was helped by a huge stroke of luck to clinch the 17th frame when a missed long red ricocheted into the white which knocked another red into the opposite corner pocket.

A break of 51 then saw the 31-year-old over the line and set up a second-round encounter with Judd Trump or Hossein Vafaei.

World number eight Mark Williams is also safely through after a 10-3 win over Michael White.

Williams was in sensational form from the off with three century breaks, including one of 138, helped him storm into a 7-0 lead.

White improved from there, but a break of 121 sealed a comfortable win for Williams. 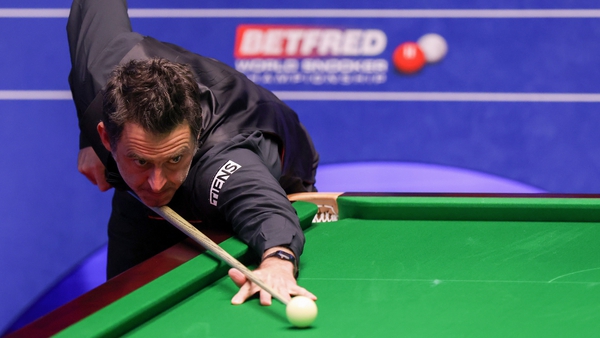 Ronnie O'Sullivan safely through to the second round at Crucible